'All they had was a piece of paper': The humble beginnings of CTV Saskatoon

SASKATOON -- This week CTV Saskatoon is celebrating 65 years of serving our community. On Dec. 5, 1954 CTV Saskatoon (CFQC) first signed on the air. We looked back to interviews done for the station's 50th anniversary to learn about the vision behind what is now CTV Saskatoon.

Adelbert Arthur Murphy had turned his broadcast dreams into reality in 1924, opening the first radio station in Saskatoon.

Decades later, a $1 million investment to build a TV station would test his resolve.

"We did have some television broadcasters from the United States that came up, visited with us, and pointed out they thought it was a good investment," said Blair Nelson, managing director of television and president of CFQC.

CFQC-TV was awarded a broadcast license on Sept. 28, 1953, opening a new world for Murphy. His first step was to move Nelson from being his commercial manager of radio to the position of television managing director.

Rowmanow thought there would at least be a station when he arrived in late 1953, but was mistaken.

"I came here and all they had was a piece of paper that said it was a license."

Murphy set about expanding his existing broadcast house for the TV shop.

"No, we didn't have much help," chief engineer Lyn Hoskins said. "As a matter of fact, myself and one other person installed the whole rig – the transmitter and the studio equipment."

Bad weather plagued the construction – and with every lost day a financial storm threatened Murphy. On Dec. 5, 1954, three months behind schedule, the station was ready for air.

"A lot of us came over and started rehearsing because we didn't get on the air when we expected to, in October," weatherman Greg Barnsley said

"So we rehearsed, we built sets and got ready to go on the air." 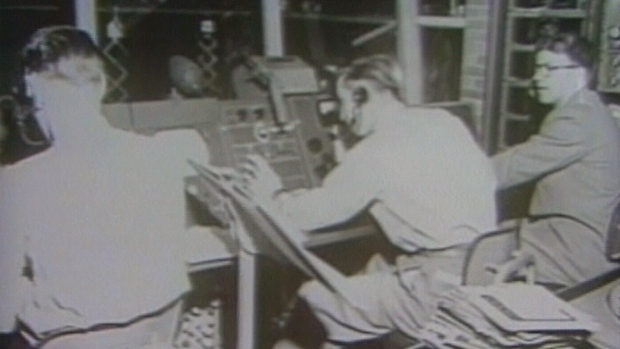 When CFQC signed on the air, however, the challenge had just begun. How would Murphy fill the broadcast days with programming Saskatoon would watch? The answer was to recruit local talent – writers, producers and on-air personalities.

Alma Smith was one of them, creating and hosting Saskatoon's first TV talk show.

"Mr. Murphy Sr. phoned to see if I'd like to do a television show and I'd never even thought about TV. But their studio, CFQC TV, was to open the next day and they didn't have a woman commentator.

"So I went down and talked a little bit about Stratford, Ont., where I'd been for the summer. And a voice from heaven – you know that high, high, ceiling – said, 'She'll do. Get a title.'

"So we rushed around, got a title, ‘Here Comes Alma,’ got a theme song, ‘Holiday for Strings,’ they put me on the stool and then they said ‘Beep-beep-beep-beep CFQC-TV opens and here comes Alma.’ and that's how it began."

Cornel Sawchuk, who hosted "Ted and Corny" along with Ted Bissland, said he found great satisfaction in the switch from radio to television.

"I don't know why, but getting in front of a camera, preferably standing up, doing something, sitting down, talking to people on my feet, was something that was completely different than sitting down in front of a microphone staring off at a blank wall or a clock and trying to make up things that popped into your mind."

Helen Lumby, host of "Kindergarten with Helan Lumby," was asked to produce the show because no kindergarten classrooms were in the school system and television could help fill the gap..

"The community and programming were synonymous because what the community did was what we did on television," Barnsley said.

"If the community is having a Red Cross blood donor clinic, of course we'd bring someone in and talk about it, exactly the same as we're doing today."