Pope Francis, the head of the Catholic church, apologized Monday to Indigenous people for the church's role in Canada's residential schools and the traumas experienced there.

Francis spoke in Maskwacis, south of Edmonton, at the site of the former Ermineskin Residential School which operated until 1975. Maskwacis is also the home of Jack Saddleback, a Two-Spirit activist who works with OUTSaskatoon and Saskatoon Pride. He spoke with CTV Morning Live host Alex Brown about his reaction to the pope's words.

This interview has been edited for length and clarity.

Can you speak about being there for this historic moment?

It was complex, to say the least. I’ve been on the fence since my community started talking about his arrival. Walking in there, the choice to walk in was knowing this point in time was never going to happen again.

It truly was a mixture of feelings, having to walk into my homeland and being told where I could go. ... RCMP was everywhere.

But what I saw was my family. What I saw were those survivors. Despite all of these historical challenges — the Catholic Church, the residential school system instituted by the Catholic Church and the Canadian government — we’re still here. We still survived. In fact, we still thrive.

What was it like being a proud Two-Spirit person, being there in regalia?

When I was walking in, I met another Two-Spirit person. I had my beaded medallion on, my Two-Spirit Pride flag walking through, I was walking for that person, those people who had to go through those residential schools, who may not have made it home. Or who did make it home, but had to leave because of the indoctrination of the Catholic church system.

I needed to be there to show that despite the hurt introduced to us, these binary viewpoints that have been tried to be instilled, we still survived. I’m still here.

As I sat there with my knees shaking, holding my flag, it was those same Two-Spirit people that are with me, that had the right to be there. As I looked around, I saw a few others, but not many. So sitting here today, thinking about that … we’re here. And we’re going to change the world and revitalize the world. We all deserve that love medicine that I grew up with. Because my family pushed back against these narratives the Catholic Church tried to instill upon us.

What’s your opinion of Pope Francis being adorned with a headdress?

There are many emotions about that and all of them are valid. The anger, hurt, frustration — hope, healing, when seeing that moment. Regardless of how you feel about that, feel it. Walk with it. This moment in time will never happen again. 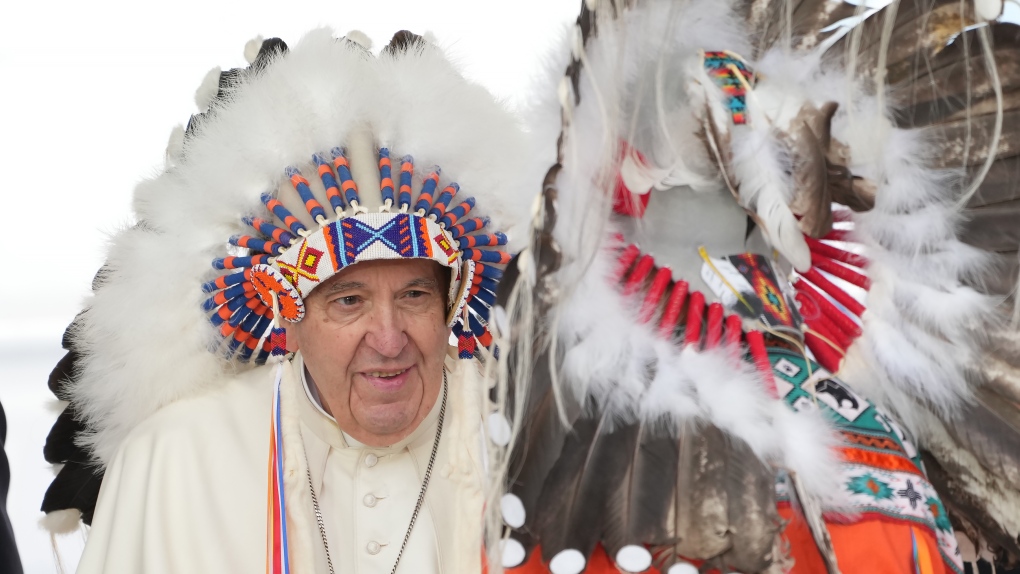 Pope Francis wears a traditional headdress he was given after his apology to Indigenous people during a ceremony in Maskwacis, Alta., as part of his papal visit across Canada on Monday, July 25, 2022. THE CANADIAN PRESS/Nathan Denette

That moment was from our chief, Wilton Littlechild, a survivor, a person who needed what he needed, and chose as an elder to do what he did for our communities. We must trust, in many ways, our elder’s viewpoints, but we can have our own feelings. So as much as I want to say be this or be that, be you. Be with those feelings that you have. But recognize the work now begins. The work is now going to happen because the acknowledgment is there, but now action must follow.