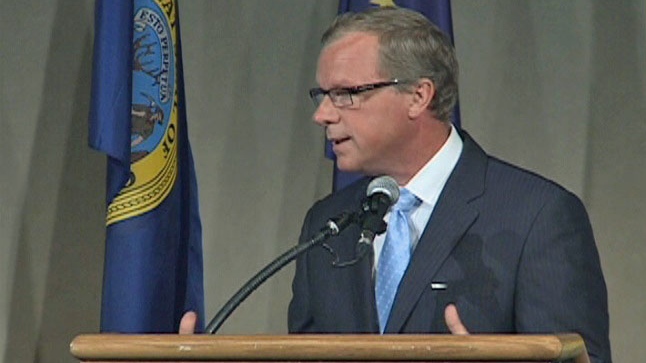 Saskatchewan Premier Brad Wall is musing about adjusting the way the province collects money from companies that extract natural resources.

Wall says companies should have royalty stability especially after they've spent billions investing in the economy.

But the premier also says it's important that taxpayers are properly compensated if in 20 years potash production has doubled.

The current complex system is based on price rather than volume and Wall says it needs to change.

However, the premier says it could be years before the discussion gets into any specific detail and there might just be some tweaking rather than any major adjustments.

Wall also says the province and industry will work together to avoid what he calls "royalty shock."

"We've said that to companies that in the long-term we're going to have to adjust as we go forward. Doubling production in Saskatchewan in 10 or 20 years is a game changer and that should be reflected in a number of things," he said Wednesday.

Former Alberta premier Ed Stelmach took a lot of heat over a decision to revisit energy royalties in that province.

Stelmach aimed to strike the right balance of maximizing revenue for taxpayers without driving the price so high that drillers look elsewhere. But a rise in royalty rates following a 2007 report brought outrage from the sector and a drop in drilling.

Wall says that's not what he has in mind.

"This is not what Alberta did. This is not a unilateral 'We're increasing royalties,"' said Wall.

"We're going to have to re-adjust so stakeholders have the stability they need and the taxpayers can be kept whole. Because if we're producing more potash and selling more potash, but making less money, that doesn't make much sense."

The Opposition NDP said a fair schedule for standard, independent reviews is no risk to stability. But it added musing out loud that a review is being planned could raise concern and cause instability within the potash industry and the resource sector as a whole.

"Letting it slip that a review might be brewing behind closed doors is likely to make our partners in the resource industry feel much less secure about investing here," said NDP resources critic Cathy Sproule.