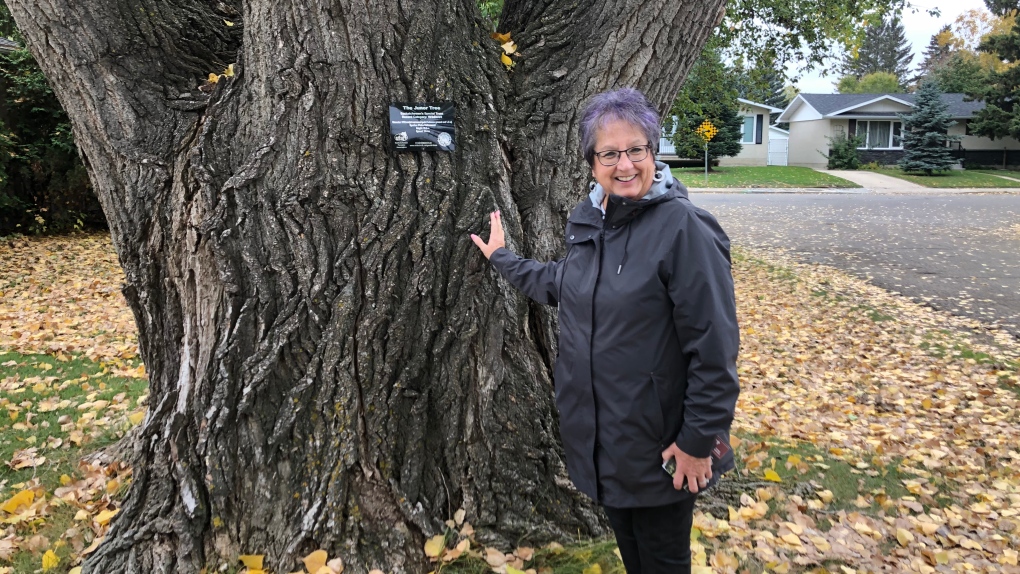 This imposing plains cottonwood first took root in front of Judy Junor’s Normandy Street house not long after it was built in 1960.

SASKATOON -- A tree in Saskatoon’s Montgomery Place neighbourhood has been recognized as the widest in the province.

The imposing plains cottonwood first took root in front of Judy Junor’s Normandy Street house not long after it was built in 1960.

"Everybody says 'Wow, that’s a big tree, that’s pretty round.' so I thought maybe I’ll just look and see what the biggest tree is in Saskatchewan and found out it was smaller than this one," Junor said.

"Once we heard about this one here, we came down and did some measurements," Keith Dodge said.

Dodge was part of the Saskatchewan Forestry Association team that helped determine the tree is indeed the province’s widest.

According to the association’s measurements, Junor’s tree is more than a meter and a half wide, 172 cm in diameter.

The tree’s recognition comes at an ideal time, Junor said, because its impressive size isn’t the only thing neighbours notice this time of year.

"It makes a big mess in the neighbourhood, but I think people will be a little more tolerant when they think the leaves on their grass are from this famous tree," Junor said.

Junor’s tree now features a plaque marking its accomplishment. She said she’s ready for the attention the honour might bring.

"I think it’s quite wonderful to have it here, so I think anybody who wants to can come and have a selfie or look at it, or do whatever they want to recognize it."