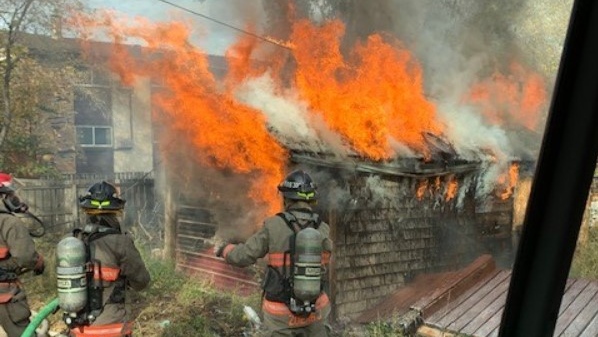 A garage fire originating from a tarped structure spread to a detached garage on Sept. 26. (Saskatoon Fire Department)
SASKATOON -

A garage went up in flames in Saskatoon on Sunday in the city's Pleasant Hill neighbourhood.

At around 3:29 p.m. the Saskatoon Fire Department received multiple calls about a garage on fire in the 100 Block of Avenue N South, according to a news release.

Firefighters first on scene reported a garage was fully involved in fire, the fire department said. The fire was brought under control by 3:54 p.m.

A fire investigator determined the fire started inside a tarped structure on a vacant lot from a briquette barbecue, the fire department said. Combustible materials and the tarp caught on fire and the blaze extended to a neighbour’s detached garage, according to the news release.

There were no injuries reported in this incident. Damage is estimated at $15,000.

A new Delta descendant is rising in the U.K. Here's what to know

British and international authorities are closely monitoring a subtype of the Delta variant that is causing a growing number of infections in the United Kingdom.

What appears to be human remains and items belonging to Brian Laundrie, including a backpack, have been found in a nature reserve in North Port, Florida, according to FBI Special Agent in Charge Michael McPherson.

As Canada's first Indigenous Governor General, Mary May Simon says part of her role entails bridging the gap in understanding between governments and Indigenous communities.

Health Canada is reminding Canadians that ivermectin should not be used to treat or prevent COVID-19, after poison control centres saw an increase in reports about the anti-parasitic drug over the summer months.

Ontario Premier Doug Ford said he believes opposition parties are playing politics over his comments on immigrants and said he's been told his remarks were 'bang on.'

A report exploring the far-right in Ukraine’s military found that neo-Nazis and supporters of far-right groups in the ranks bragged about receiving training from Canada and other NATO nations.

Prosecutors pursuing the case against a man accused of raping a woman on a commuter train last week don't anticipate charging fellow passengers for not intervening, a spokesperson for the suburban Philadelphia district attorney said.

Ontario Provincial Police are investigating after multiple animals, including calves and piglets, were found abandoned on a farm in Haldimand County in southern Ontario.