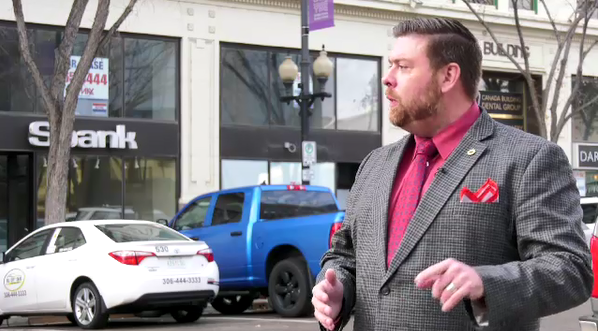 Mark Zielke is pictured in this file photo.

A Saskatoon businessman who also represented people in small claims and traffic courts has been vindicated in a clash between conflicting regulations.

However, the Law Society of Saskatchewan says the legal landscape has shifted since the inciting injunction and the issue requires further review.

Justice Robert W. Leurer said in his Dec. 1 decision that the Summary Offences Procedure Act (SOPA) and Small Claims Act allow Mark Zielke to represent people in court, despite the fact he's not a lawyer.

Zielke describes himself as an entrepreneur and advocate, connecting people looking to buy, sell, or invest in the Saskatoon business community.

In 2019, the Law Society of Saskatchewan obtained an injunction to prevent Zielke from working in court, as the Legal Profession Act prohibited people who aren't certified lawyers to practice in civil or criminal jurisdiction.

However, Leurer ruled that certain provisions of the Criminal Code, which were incorporated into the SOPA, allowed an agent to appear at trial and perform counsel-like functions - including examining and cross-examining witnesses.

"I would add that this understanding of these provisions is consistent with the overall objective of the SOPA. It is designed to provide generally simplified procedures to deal with less serious matters. Because they are less serious, they are often less complex. The stakes to the defendant are often less significant.”

"By authorizing the use of agents through the incorporation of these provisions into the SOPA, the Legislature has also recognized that some defendants to summary offence matters are either not comfortable with representing themselves or are unable to do so effectively.

"In allowing representation by an agent, the Legislature might reasonably be taken to have recognized that many, if not most, defendants in these circumstances would not or could not seek representation from a lawyer. The Legislature must also be taken to have determined that the interests that generally require that parties to court proceedings be represented only by qualified lawyers are not sufficiently compelling to deny defendants the choice of other, non-lawyer representation in less serious summary conviction matters."

Leurer quashed the injunction and awarded Zielke $2,000 in costs.

Law Society deputy executive director Timothy Huber said in an email to CTV News that the decision is rooted in the interpretation of statutory provisions that no longer exist.

"The unauthorized practice provisions discussed in the Court of Appeal decision were repealed and replaced with new provisions in 2019," he said.

"So the landscape has shifted since the injunction decision. The court confirmed in the decision that they could not comment on whether or not the outcome of the appeal would be different had the matters been under the new legislation. That issue requires further review and consideration."

He said the society is modernizing its approach to the regulation of the practice of law. It has identified groups who are exempted from legislated unauthorized practice of law provisions and who may in the public interest provide limited legal services without becoming a licensed lawyer.

"These changes were the result of a collaborative review undertaken by the government, the legal profession, members of the public and other stakeholders designed to assess the need for alternative legal services providers in Saskatchewan."

"The Law Society has embraced this and other recommendations to increase access to justice. The Law Society is committed to implementation in a responsible and sustainable manner, balancing the need for ensuring public protection with enhancing legal services for underserved Saskatchewan individuals."

He said pilot projects will be starting next year in which alternative legal service providers will work with the Law Society to refine existing exemptions and expand the list of exemptions to unauthorized practice and develop a framework for limited licenses for legal services that can be granted by the Law Society on a case-by-case basis.

A license to practice law comes with regulatory protections - and those safeguards do not exist for unregulated non-lawyer agents or other non-lawyer service providers, he said.

When contacted, Zielke he said he would only be available for an in-person interview which CTV News could not accommodate at the time.