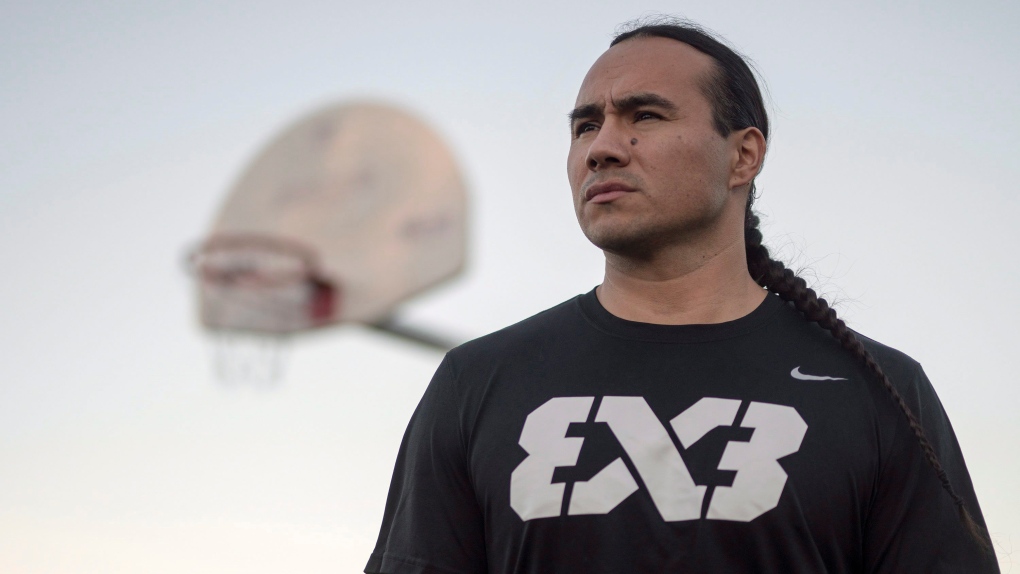 Michael Linklater, who is playing in the FIBA 3x3 World Tour Final in Beijing later this week, stands for a photograph at an outdoor basketball court near his home in Saskatoon on Tuesday, Oct. 24, 2017. Linklater has been the top-ranked 3-on-3 player in Canada for several years, and 3-on-3 will be on the program for the Tokyo Olympics. He's also First Nations and has his own program that takes basketball into Indigenous communities. THE CANADIAN PRESS/Liam Richards

Michael Linklater remembers the day he fell in love with the game. His elementary school in Saskatoon had just laid a new asphalt basketball court, and a group of older boys playing pick-up had drawn a crowd during recess.

Linklater, who was 12, jostled to get a good view. The atmosphere was electric.

"Everyone in the schoolyard surrounded the court, it created almost like a stadium in a sense," Linklater said. "And to see what some of these older players were doing on the court was really cool because I had never seen that before up close and in person. So, that's where I fell in love . . . I picked up the basketball and never looked back."

That playground atmosphere, when the music is blaring and fans are squeezed into bleachers, is part of what draws the 35-year-old Linklater to the 3-on-3 game. It's taken him around the world, including to Beijing, where Linklater's Team Saskatoon will play in the FIBA 3x3 World Final that tips off Saturday.

Most importantly, it's provided a stage for his work with Indigenous youth.

"Sports is an easy platform to connect with people," Linklater said from his Saskatoon home, where a film crew was working on a documentary. "And my success on the sporting field has really given me a spotlight to shine on some of the issues that are plaguing Indigenous people."

Linklater, who is Nehiyaw (Cree) from the Thunderchild First Nation, willingly shares his story. His grandparents were residential school survivors, but would both die of alcoholism. His mom was sent to New Jersey to be raised by a non-Indigenous family as part of the Sixties Scoop - when some-20,000 Indigenous children were "scooped" up in the 1960s and placed in foster homes or adopted.

His mom battles addiction. He never knew his father. He was raised by his great-aunt.

When he speaks to youth, he tells them he was destined to fail.

"For me to be able to share my story with a lot of youth who come from some of the same situations that I did, I hope to encourage people that they can do what whatever it is they want to in life," Linklater said.

Linklater captained the Saskatchewan Huskies to their first Canadian university title in 2010. Afterward, he carted the huge W.P. McGee Trophy to a handful of Saskatchewan high schools to speak with kids. He went on to play for the Edmonton Energy of the IBL before he stumbled upon the 3-on-3 game, which will make its Olympic debut in Tokyo.

While there are no positions in 3-on-3, which is played on a half-court with a 12-second shot clock, the five-foot-10 Linklater was a point guard in college. He's easy to spot on the court with a braid that hangs halfway down his back.

Linklater was relentlessly bullied for his braid as a kid. He begged his great-aunt to let him cut his hair. When his sons -- Amari, 13, and Dream, nine -- suffered the same racist taunts, Linklater started an international campaign called Boys With Braids.

"It's making sure I teach my boys to be proud of their culture, but it extends bigger than that," Linklater said. "The people in the school system, the educators and the superintendants, directors of the school boards, these are the people who need to understand the significance of why Indigenous men grow our hair. It's not just a fashion statement."

Canadian basketball doesn't have a high-profile Inidigenous athlete like NHL players Carey Price and Jordin Tootoo. Linklater -- who founded Prime Basketball Development, which travels into Indigenous communities, plus holds skills clinics elsewhere -- dreams of a day Indigenous athletes suit up for Canada's national team or play in the NBA.

"There needs to be something in place to help support Indigenous athletes," he said. "A lot of the communities I've visited, there are phenomenal, talented athletes. But the system is not set up for these athletes from Indigenous and poverty situations to succeed."

As for the 2020 Tokyo Olympics, qualifying is still to be determined, but Linklater said Canada needs to accumulate more points on the World Tour. As a team that has blazed a trail, Saskatoon's players would love a shot.

Sir, a 35-year-old who first met Linklater while playing for the Edmonton Energy, said they "would have to be kind of crazy not to want to try and pursue it.

"There are a lot of cool things that happen in the world of sports. But this is the Olympics."

The 3-on-3 game ends after 10 minutes or when a team scores 21 points. The 3x3 Final in Beijing is being held on a portable court in a shopping mall.

Saskatoon plays two games on Saturday, the quarters and semifinals are Saturday, and the final Sunday. Saskatoon's top finish in the World Final was silver in 2014 in Japan.