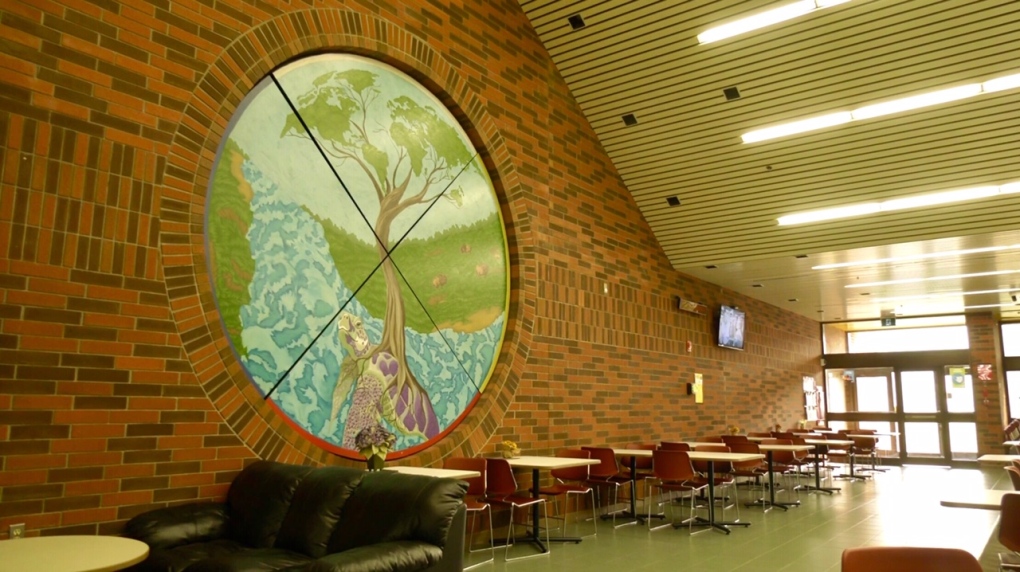 A new mural at the Saskatchewan Polytechnic campus in Prince Albert aims to connect and celebrate students and staff of all backgrounds.

The idea dates back to several years ago from a now retired Indigenous student advisor.

It started taking off in 2019, though, when artists Annette Lanoie and Jordan Twist started combining their talents.

Lanoie is also an instructor at the Prince Albert campus.

“We wanted to make sure that we give tribute to everybody here at Sask. Polytech, that they’re welcome here,” she said.

The mural contains a turtle, representing Turtle Island, a name for North America used by many Indigenous peoples. Its circular shape pays tribute to the medicine wheel.

A tree comes up from the turtle’s shell. In the foliage is a world map, which Lanoie said shows inclusion between both Indigenous people and newcomers.

A river running throughout the background represents Prince Albert and Treaty 6 territory.

“It evokes conversation about what the mural represents, and so people are able to listen and seek knowledge on Indigenous culture through storytelling, as well as visual arts,” explained Lanoie.

The mural is located in the cafeteria.

Twist, the other artist who worked on the project, also completed a mural in the South Hill Mall in January.

“When you’re making something you love and it speaks to you, that’s a great feeling,” Twist said in a news release.

Lanoie said it took the pair about eight weeks to complete. Because the mural couldn’t be painted directly on to the wall, the installation process took over 10 hours.