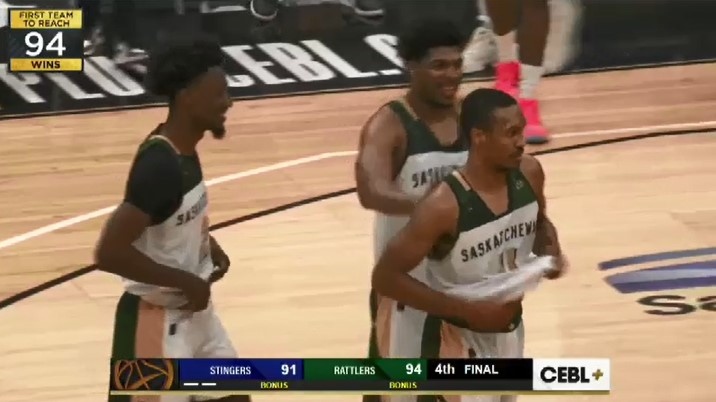 The Saskatchewan Rattlers proved no lead is safe in the CEBL during their first-round playoff win over the Edmonton Stingers.

Saskatchewan came away with a 94-91 win in a contest that saw the Rattlers nearly collapse late in the game, and almost blow a 14 point lead.

The Edmonton Stingers would close the gap in the third quarter, outscoring the Rattlers 25-17 to pull within eight points.

What ensued was a see-saw battle in the fourth quarter that saw the Rattlers expand their lead to 14 points after Jordy Tshimanga made a field goal and later converted a free-throw. That gave the Rattlers a 90-76 lead, needing only four points to reach the target score of 94.

The Stingers began a furious rally, which started with Matthieu Kamba nailing a basket for three, followed later on by another three point play.

Edmonton would go on a 15-2 run to pull within one point, and put fans at SaskTel Centre on the edge of their seats.

However, the Stingers' Jordan Baker would commit a crucial foul, setting up two free throw shots for Tony Carr to try win the game. The NBA draft pick would make them both, sending the Rattlers to the quarterfinals, and avoiding a late-game scare from the Stingers.

Devonte Bandoo finished the game with 22 points while Tony Carr had 20 for Saskatchewan.

The Rattlers will play either the Niagara River Lions or the Scarborough Shooting Stars in the quarter finals this weekend.