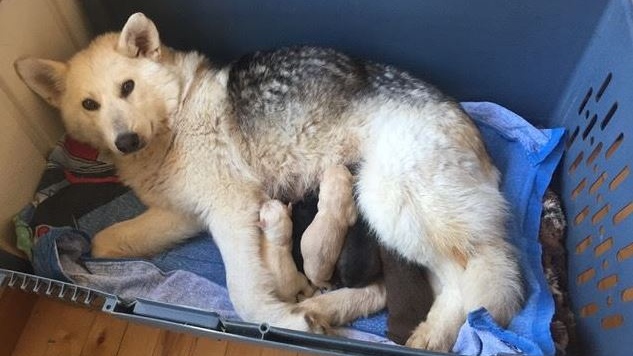 An Alberta animal rescue recently came to the aid of dozens of stray dogs in La Ronge, transporting them from Northern Saskatchewan to larger centers in Alberta.

It’s not the first time Alberta animal rescues have offered assistance in Saskatchewan, and with more Saskatchewan communities reaching out for help, it likely won’t be the last.

Prince Albert SPCA manager of operations Kathleen Howell said they are already struggling to keep up with the stray dog populations in Prince Albert, let alone the north.

“We’re all just trying to stay above water.”

Howell says Saskatchewan has a higher stray dog population than Alberta and a much smaller human population. So when dogs are transported to Alberta their odds of finding a forever home improve drastically in a province with over four million people.

“That’s three million more people with the possibility of adopting an animal. That’s a huge difference from Saskatchewan.”

Howell said the Prince Albert SPCA works closely with the Northern Animal Rescue in La Ronge and will take dogs from the north whenever there is room.

A pitbull named Tiny is one of the dogs the Prince Albert SPCA has taken in from the North and Howell says the fact that Tiny is still there after five months shows are hard it is to find adoptive homes in the area.

“We don’t have the adoption rates to foster something like pulling 136 animals from Northern Saskatchewan,” Howell told CTV News. “That isn’t even feasible.”

Howell said Saskatchewan doesn’t have rescue organizations with the capacity to pull off what the Alberta rescues do, and she is grateful for the help northern communities are receiving.

Howell said the Prince Albert SPCA has strong connections with many animal rescues in Alberta and is happy to put people in touch with someone that can help when the SPCA can’t.