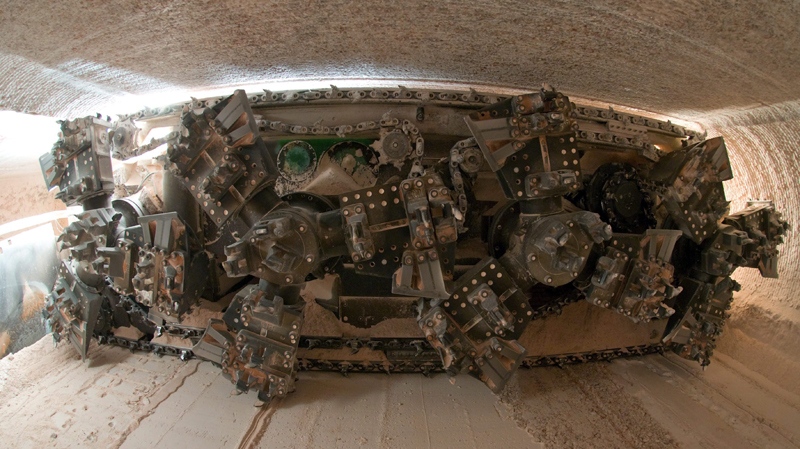 The cutting face of a potash borer is shown in a deep shaft at the Rocanville potash mine, owed by the PotashCorp of Saskatchewan, in Rocanville, Sask., in this 2007 photo. (Troy Fleece / THE CANADIAN PRESS)

A group of Newfoundland nuns tried but failed Tuesday to get the Potash Corporation of Saskatchewan to conduct an independent review of its operations in Western Sahara.

The Sisters of Mercy of Newfoundland, along with Meritus Mutual Funds, submitted a motion at the company's annual general meeting asking that it conduct and make public an independent assessment of its human rights responsibilities in the area.

The motion failed to pass.

PotashCorp (TSX:POT) buys phosphate rock from a Moroccan state-owned mine that is located in the contested region of Western Sahara.

The Sisters of Mercy have expressed concern that the human rights of the Sahrawi people, who live in Western Sahara, have been violated by the Moroccan government.

"Our primary concern is to ensure that there is local benefit and in recent years the benefit has been improving," Burton said in a telephone interview. "The mine that we are buying potash from employs a large number of Sahrawi people, something in the order of 60 per cent."

Burton said KPMG independently completed the study showing local economic benefits, but that PotashCorp doesn't have the right to release the study to the public.

The nuns submitted a similar proposal at Agrium Inc.'s annual general meeting last week, where accounts of the meeting showed it apparently received only 12 per cent support.