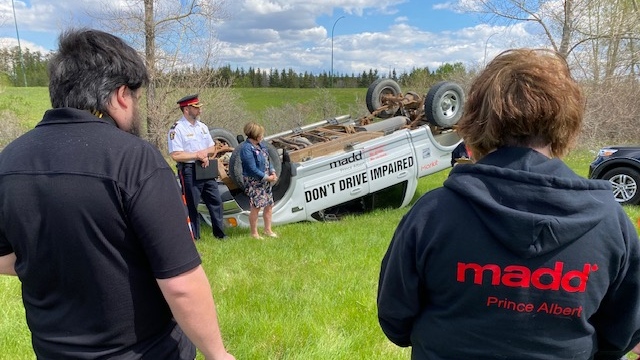 People headed to the lakes this summer on Highway 2 will get a graphic message about drinking and driving courtesy of MADD’s smashed vehicle display.

The display uses a car from a real-life crash. It’s placed in the ditch, flipped on its roof, with a crashed cab with orange pylons around it.

Karen Anthony-Burns says the vehicle is a sobering visual demonstration to drivers of what can happen when someone chooses to drive impaired.

He says the provincial-funded Combined Traffic Enforcement Unit and partnerships with MADD and SGI have helped enforcement efforts.

“If you drive impaired, you will be caught. The police will catch you. We have the tools to detect consumption of alcohol and drugs,” said McDonald.

The car will be placed at various locations throughout the City of Prince Albert from May to September.

Police in Saanich, B.C., say they continue to investigate the possibility that a "third suspect" was involved in a fatal shooting at a bank that left two suspects dead and six officers injured Tuesday.

Where do the inquiries into the 'Freedom Convoy' protests and use of Emergencies Act stand?

Five months ago, the first 'Freedom Convoy' trucks rolled into Ottawa. After the federal government took the unprecedented step of invoking the Emergencies Act to end the protests, a series of inquiries and probes have been initiated. With the nation's capital bracing for more protests over the Canada Day weekend, CTVNews.ca takes a look at where the main commissions and studies stand.

A mother of three children is speaking out after spending a night on the floor of Toronto Pearson Airport with her young kids in a nightmare weekend of travel.

A toddler accidentally left in a vehicle for hours died Tuesday and police said his father was found dead in an apparent suicide at their Virginia home, police said.