SASKATOON -- The number of COVID-19 cases linked to an outbreak at the Lighthouse has climbed.

Twenty-seven staff and residents there are now infected, according to Don Windels, the shelter’s executive director.

“It was a quick jump. We were always concerned right from when COVID-19 first started, that if it ever got into the shelter system, it could spread quite quickly,” he told CTV News.

The outbreak was declared on Oct. 23.

Since then, Windels said the Lighthouse has been taking extra precautions, including having staff get tested for COVID-19 weekly. Meals are also being delivered to residents’ rooms rather than having them in the communal dining area.

He said both shelter and long-term residents are being encouraged to stay in the building so that they can keep the virus contained.

Throughout this, the Lighthouse has been working closely with the Saskatchewan Health Authority (SHA) to get the outbreak under control.

Suzanne Mahaffey, executive director of primary care in Saskatoon, said in a statement that the SHA has sent extra staff to help with COVID-19 assessments, basic daily care, medication assistance and other nursing supports.

“We will continue to work closely with the Lighthouse to determine any other support needed to contain the spread of COVID-19 in this facility and throughout the community,” the statement said.

As a result of the outbreak, the Lighthouse has had to limit some of its services and is no longer able to accept new people to the emergency shelter until at least Nov. 8.

In the meantime, Windels said the Lighthouse has been looking at moving the emergency shelter out of its current location to another spot downtown.

While it’s a discussion that’s been going on for a while, Windels said the timing feels right.

“We want to serve Saskatoon to the best ability possible and to serve those that are homeless. One of our goals is to end chronic homelessness and that’s going to take a transformation of the shelter system itself.”

Windels said his hope is that the Lighthouse and the community will learn from this outbreak and come out stronger on the other end.

The Lighthouse has 61 shelter beds and more than 140 permanent residents. 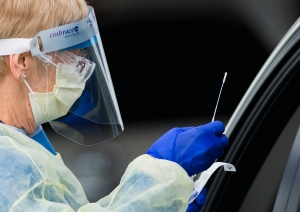