SASKATOON -- A 25-year-old woman from Big River is questioning whether school is more important than mental and physical health after testing positive for COVID-19 while studying in the U.S.

“I’ve had so many breakdowns and not just because of the course load that I have in school, it’s because I’m away from my family, I don’t have that support system or the ability to go home for a weekend and take that time to be with family,” Chaneil Morin said.

Morin is studying her masters in Speech Language Pathology at Minot State University in North Dakota, which borders Saskatchewan and Manitoba.

She moved there in August and hasn’t been able to come home since due to the pandemic.

Morin said she started experiencing symptoms of COVID-19 on Oct. 22 and has been self-isolating ever since. She got a positive test result on Nov. 1.

“It was probably the worst thing I’ve ever experienced. I had to sleep in a chair for the first five days because I couldn’t breathe laying down. I had a fever, chills, I was tired all the time, sore throat, coughing all the time, loss of appetite. I actually lost 10 pounds in the first five days because I didn’t eat. Loss of smell — I currently still don’t have my smell back.” 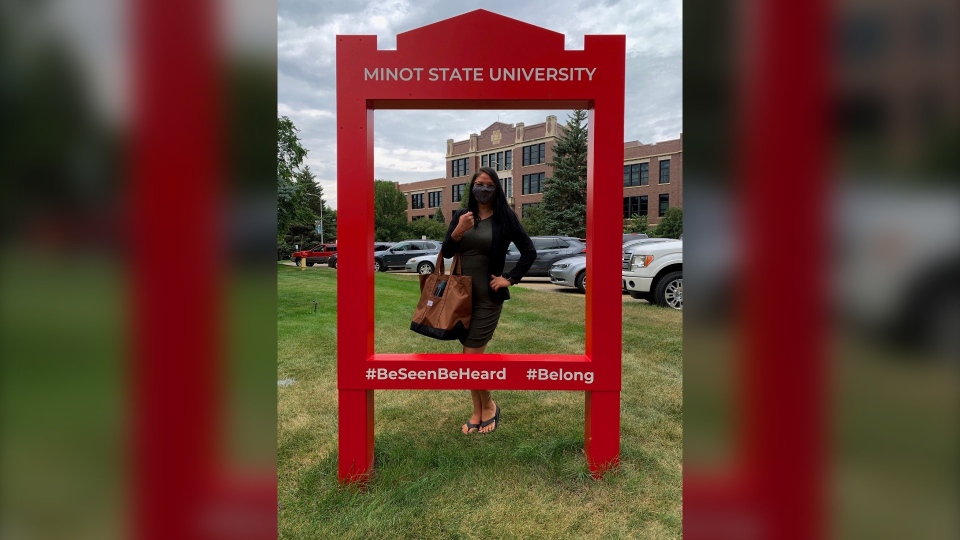 Morin said one of the hardest parts of having COVID-19 while abroad is not having family around.

“They’re all worried for me back home and I’m trying not to worry them down here but it’s hard when you just want to call home and be like, ‘I just need my mom.’” she said.

As of Tuesday, North Dakota reported a total of 47,192 cases and 561 deaths since the start of the pandemic. By comparison, Saskatchewan has had 3,373 cases and 25 deaths.

“Coming from a small town to a city in North Dakota was a huge eye-opener because the numbers here have been 1,000 a day, if not more. The number of deaths in the state is insanely high. It’s just very different from what I’m used to,” Morin said.

From her experience living in the U.S., Morin said Canada seems to be much stricter with COVID-19 rules. She cited how international travellers no longer have to self-isolate when they arrive in North Dakota and that bars and restaurants are fully open, with only some restrictions in place.

As for school, Morin said she has two in-person classes a week with seven people per class and the rest are all online.

“It was definitely nerve-wracking going in to class because I mean I haven’t been in a group since the whole start of this.”

Morin said masks are mandatory on campus and that students must have their temperatures checked before entering the buildings.

She said her campus saw about 300 active cases during an outbreak around early October.

“Some activities were changed, like sporting events, you’re not allowed that many spectators. But other than that, it’s pretty much the same as when we got here.”

Dr. Nazeem Muhajarine, professor of community health and epidemiology at the University of Saskatchewan College of Medicine, said he has some guesses as to why the attitude towards COVID-19 in the U.S. appears to be much different than in Canada.

He pointed to how campaigns leading up to the U.S. election on Tuesday has impacted people’s behaviours and beliefs about the disease. He said some people believe the current president, Donald Trump, has done as much as he can to fight COVID-19, while others don’t think that’s true.

Muhajarine said Americans tend to think about their freedom and rights a lot more compared to some other countries.

“Those Canadians who are living in the States, I think probably have some measured ideas and feelings about those kinds of attitudes. They probably think well, law and order, it’s a good thing to have in society because those laws and regulations are there to protect people.”

Muhajarine added that it is important for Canadians who are studying abroad to opt for online learning over in-person classes if possible, continue wearing a mask while in public places, stay home as much as possible, practice hand hygiene and limit the amount of people they see outside of their immediate household.

“These are the things that has been shown to work from jurisdiction to jurisdiction, from province to province, from state to state. If we all practice this behaviour, we could actually bring down the virus again,” he said.

As for Morin, she said other than her loss of smell and occasional coughing, she feels mostly back to normal and is expected to be released from quarantine on Wednesday. In North Dakota, people only have to quarantine for 10 days, according to Morin.

She added that the belief there is that once someone gets COVID-19, they become immune — something Muhajarine said there hasn’t been enough evidence on yet and therefore, people who have been infected should remain vigilant.

Morin said she is looking forward to going home to Saskatchewan to see family for Christmas, and hopes that having to quarantine for two weeks when she’s back won’t interfere with the festivities.

She is reminding everyone, especially young people, to continue doing their part to keep themselves and others safe.