After receiving top surgery to remove his breasts on June 1, Hunter Thompson is on his way to living out his true self.

The two and a half hour surgery included a mastectomy, nipple grafts and liposuction.

“I woke up and I looked at my chest and I immediately started crying. ‘They’re gone, they’re finally gone,’” he said. “I was so emotional.”

While the province covers the surgery itself, it doesn’t cover expenses such as travel, accommodations, food and medication.

Thompson said his nausea medication alone costs more than $100 and trips to Regina to get his drains taken out cost roughly $100 each way.

Zann Foth set up a GoFundMe page for Thompson to help cover his recovery expenses.

When Foth received top surgery seven months ago, someone did the same thing for them, so Foth wanted to pay it forward.

Thompson said the fundraiser helped him to get the support he needed because his parents aren’t “very supportive” and are “negative” about his transition. 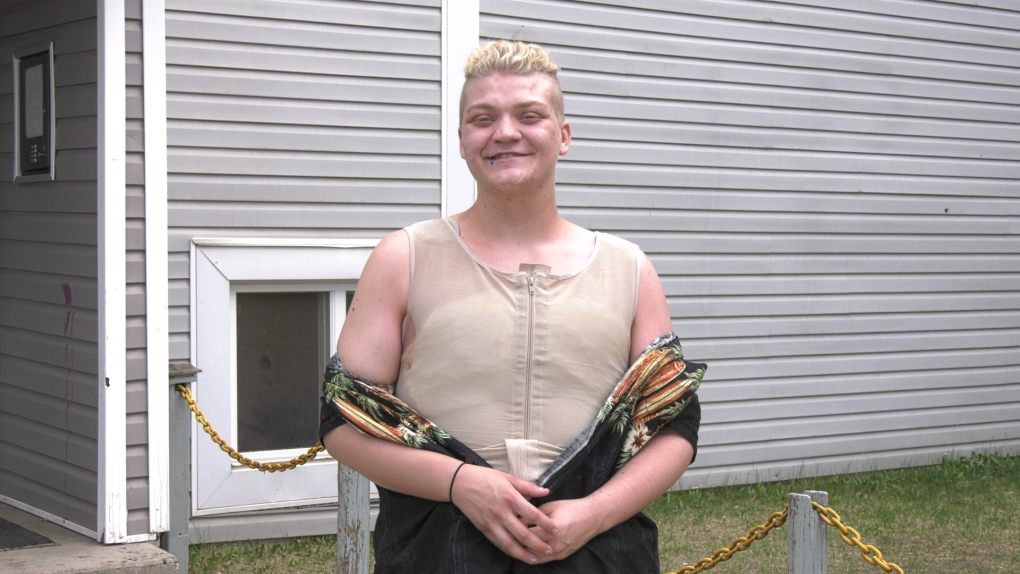 Hunter Thompson is recovering from his top surgery on June 1. (Miriam Valdes-Carletti/CTV Saskatoon)

“All the support that people have shown on it, like I’ve cried so many times looking at people donating. I don’t even know why you care, but thank you,” he said.

His girlfriend, Jasmine Starling, has been staying with him to help in his recovery.

Starling said since getting top surgery, Thompson has a more positive outlook.

“Before, when I first met him, he was more shy and didn’t like being shirtless or anything tight,” said Starling.

For Pride Month throughout June, Thompson wants people to know how important top surgery is for him and other transgender people.

“I looked in the mirror and I would cry every single time because I don’t like my chest and I didn’t like it at all. It felt weird to shower, it felt weird to get dressed,” Thompson said.

He said it “means the world to him” that top surgery is covered in the province because he considers it a mandatory surgery for his health.

Thompson said the next steps in his transition are to have the gender on his birth certificate changed and to legally change his name.

China said Monday its launch of a new spacecraft was merely a test to see whether the vehicle could be re-used.

PM Trudeau is set to visit Kamloops, hospitals consider vaccine mandates, and pandemic benefits are set to expire. Here's what you need to know today.