'I am so overwhelmed': Family of two children killed in crash near Beauval, Sask. thankful for support

SASKATOON - A woman who is grieving over the loss of her cousin and niece says she’s "overwhelmed" after a crash that killed three people, took away a part of her family.

Fifteen-month-old Kinzey Iron-Couillonneur, her 12-year-old cousin Jerome Coulineur, and a paramedic – whose identity has not been released – died in Friday’s crash near the northern Saskatchewan village of Beauval.

According to RCMP, while an ambulance was responding to a call, it collided with a truck. Icy road conditions are to blame.

Melissa Laliberte told CTV News one of the cars had four of her family members in it, as they were on their way to Edmonton for a 16-year-old’s birthday.

Laliberte said her dad Andrew LaRiveriere was driving at the time and is recovering at Royal Univeristy Hosptial in Saskatoon..

He suffered fractured ribs, a bruised heart and lungs, and a broken ankle in the crash, she said

“Our family has been together this whole time. We’ve just been with our dad and also our nephew has been in (the hospital), so he’s been by my dad’s side. We’ve all been together,” she said.

“Thank you everyone for your thoughts prayers and all the support were getting. I don’t want to answer questions or talk to anyone yet. My heart hurts so much,” Kinzey’s mother Alexa LaRiviere-Lalibertewrote on Facebook.

“Needing prayers for my daddy,” she wrote. “I’m gonna go crazy if I lose him too.”

The family's home community, the hamlet of Jans Bay has banded together to show its support.

“The community of Jans Bay along with those deeply affected in Cole Bay and Beauval have suffered yet another terrible loss,” the page reads. 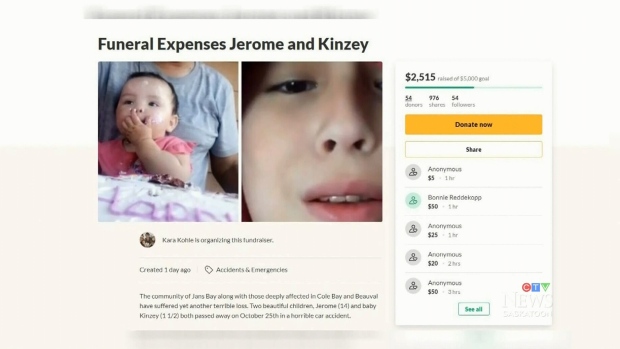 A local radio station hosted a bingo night Sunday, with proceeds going to the children’s family.

Jans Bay Community School cancelled classes on Monday and issued a letter to parents and caregivers.

“Northern Lights School Division has provided additional supports for staff and students and there are supports available for community members that may also be accessed,” the letter read.

Instead of class, the school opened its doors for a day of board games, with counsellors made available.