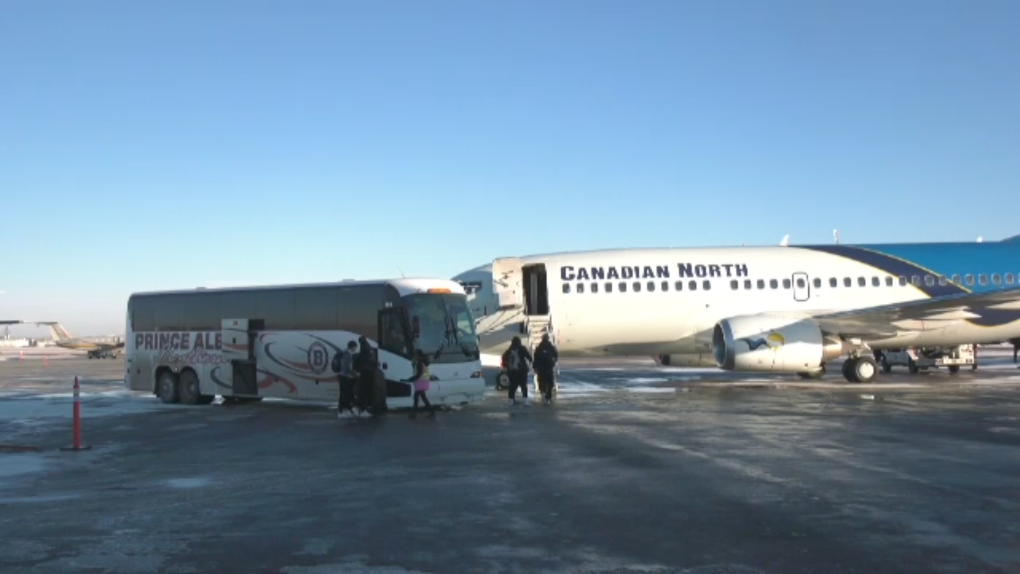 The University of Saskatchewan Huskies had one goal in mind when the season began in August: to win the Vanier Cup.

After falling to the Western Mustangs 27-21 in the national championship game a year ago, the Huskies met every goal they set for themselves this season and are now one sleep away from playing in the 57th Vanier Cup in London, Ont. on Saturday.

"This is kind of the final step that our program has to make -- that's winning a Vanier Cup" quarterback Mason Nyhus said Friday before the team's final practice.

"So I think our sole focus and goal is winning on Saturday this year."

The Huskies' laser-sharp focus has been on display all year. The team has a combined 10-1 this season, with their only loss being a 35-29 loss to British Columbia in the second-last game of the regular season.

However, standing in the Huskies' way is a familiar foe, the Laval Rouge Et Or.

Saskatchewan and Laval have faced each other four times in elimination playoff games. All games finished with close scores. After a loss in 1999, there was a string of three straight meetings between 2004 and 2006 with Saskatchewan winning a national semifinal in 2005.

The Huskies hosted the Vanier Cup in 2006 at Griffiths Stadium, and the game is more remembered for the bone-chilling temperatures than it is for compelling action.

With the temperature hovering near -30 C with the windchill, Laval ended up winning 13-8 for Saskatchewan's third consecutive loss at a Vanier Cup.

Laval has since gone on to win six more Vanier Cups.

Though none of the current Huskies players have faced Laval, the respect for the championship juggernaut runs deep.

"Just the fact that you get to play against another national powerhouse like Laval who's been one of the top programs in the country since the start, it's really exciting for you to say when you're done playing football, 'Yeah, I got to play against the University of Laval in the Vanier Cup,'" defensive back Charlie Ringland said.

Looking to tinker with the preparation routine from last year, head Scott Flory decided to fly home with the team after its 36-19 win over the St. FX X-Men in last weekend's Uteck Bowl.

This allowed the team additional practices, video sessions, and the comforts of home before chartering a plane to London Wednesday afternoon.

A year ago, Flory and the team decided to stay at a Montreal hotel for eight days instead of returning to the prairies between games.

"We felt it was incredibly productive actually being back in those first few days of practice back at Griffiths and then also from a coaching standpoint and game planning and all that stuff," Flory said.

With all that extra preparation being done at home, Flory isn't putting any extra pressure on his players. He wants them to go out and play like they always do.

"Don't think, just do. Just play. Sometimes the worst thing athletes can do is think -- and we're not here to think," he said. "That's why we train. That's what we prepare for. We just want them just to play. We get it's not just another game, it's a Vanier Cup."

The game will also feature the two finalists for the Hec Crighton Trophy as the MVP of Canadian university football: Nyhus and Laval receiver Kevin Mital.

Mital ended up winning the award Thursday after compiling 58 catches for 751 yards and 12 touchdowns.

With the hours running out on Nyhus' Huskies career, the fifth-year quarterback is doing his best to soak up the experience of gameday one final time.

"'I've got two more days here in my university career, so I'm just grateful for everything," Nyhus said. "Trying to focus on the football game and just trying to get ready to win a Vanier Cup, so yeah, I'm feeling good."

A family in the remote community of Peawanuck, Ont., is dealing not only with the death of their young daughter, but the loss of everything they owned in a Jan. 28 house fire.

Cindy Williams, who was among the most recognizable stars in America in the 1970s and 80s for her role as Shirley opposite Penny Marshall's Laverne on the beloved sitcom 'Laverne & Shirley,' has died, her family said Monday.

Adding some milk to your morning coffee may boost the body's anti-inflammatory response, new research out of Denmark shows.

The beginning of February is expected to bring Arctic-like temperatures across much of Eastern Canada, thanks to frigid air from the polar vortex. The cold snap will descend on Eastern Canada this week, with temperatures becoming seasonable again on Sunday. In between, much of Ontario, Quebec and Atlantic Canada can expect the coldest days yet this winter.

A report commissioned by a non-profit organization founded by the late Jean Vanier says the Canadian sexually abused 25 women during his decades with the group.

A six-year-old girl died in hospital Sunday night after being involved in an incident at the Val-Saint-Côme ski resort in Lanaudiere. Quebec police are investigating, though details into the event are not yet known. Officers indicated that it involved a T-bar lift, but they were not able to say more.

The Mindbender roller coaster at Galaxyland has been shut down, West Edmonton Mall announced on Monday. The redevelopment of the area is already underway, and the roller coaster is being decommissioned and removed.

Without Bobby Hull, the Winnipeg Jets wouldn’t be in the NHL right now. That’s how one of his former teammates feels about the late Jets forward.