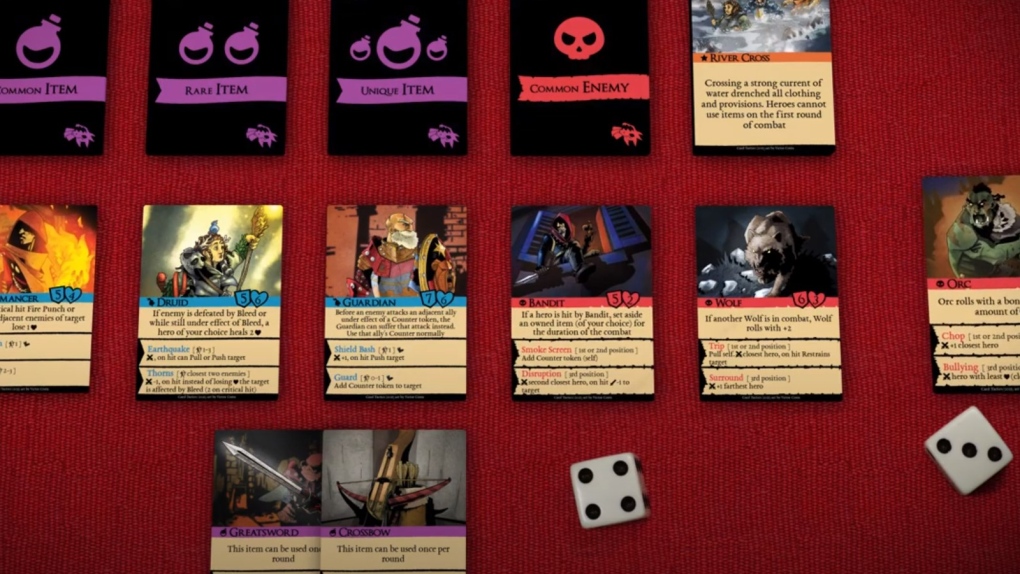 Gui De Souza Rocha from Regina is the creator of Card Tactics, which is a strategy card game.

SASKATOON -- A Saskatchewan man is in contention to win a contest with his strategy card game.

Gui De Souza Rocha from Regina is the creator of Card Tactics.

“I’ve been dabbling into creating games since I was a teenager. And I’ve been playing tabletop games for a very long time.”

De Souza Rocha says his game is based video games such as Darkest Dungeon and Dark Souls.

“I tried to find a way of making something that would work kind of like a video game, but in an analog, like a board game scenario.”

He says he began creating the game while he was living in Brazil five years ago. He eventually moved to Regina, and noticed there was a contest where entrants could submit a game design that can only be played by one or two players.

That’s when De Souza Rocha decided to finish his game and enter the contest called the Solo Duo Challenge. His game is now one of 20 semi-finalists.

He has also released a smaller digital version people can try as a demo on Tabletopmania.

Gamers hoping to win a gold medal will soon have a chance to own the podium, as Sega’s Olympic Games Tokyo 2020 – The Official Video Game will be released June 22.

The Tokyo Olympics have been delayed by the COVID-19 pandemic, and that also pushed back the release of the video game.

The game includes 18 events and users will have plenty of options to customize their athlete with costumes ranging from a pirate to an astronaut, according to the game’s website.

The game will be released on Playstation 4, Nintendo Switch, Xbox One, PC and Stadia.

More than 350,000 Call of Duty accounts have been banned over the last 12 months as part of a strategy to combat “toxic behavior” in video games.

“We are committed to delivering a fun gameplay experience for all of our players. There’s no place for toxic behavior, hate speech or harassment of any kind in our games or our society. We are focused on making positive steps forward, and together celebrating the best fans in the world,” reads a blog post on the Call of Duty website, updating users on an anti-toxicity progress report.

It says in the last year, the accounts were banned for racist names and toxic behavior based on reports submitted by players as well as a review of the player database.

New filters have been implemented to catch offensive user names, tags or profiles and technology has been deployed to filter potentially offensive text chat. More resources will be devoted to detection and enforcement, as well as a consistent and fair review of enforcement policies, the company says.

“Our goal is to give players the tools needed to manage their own gameplay experience, combined with an enforcement approach that addresses hate speech, racism, sexism and harassment.”