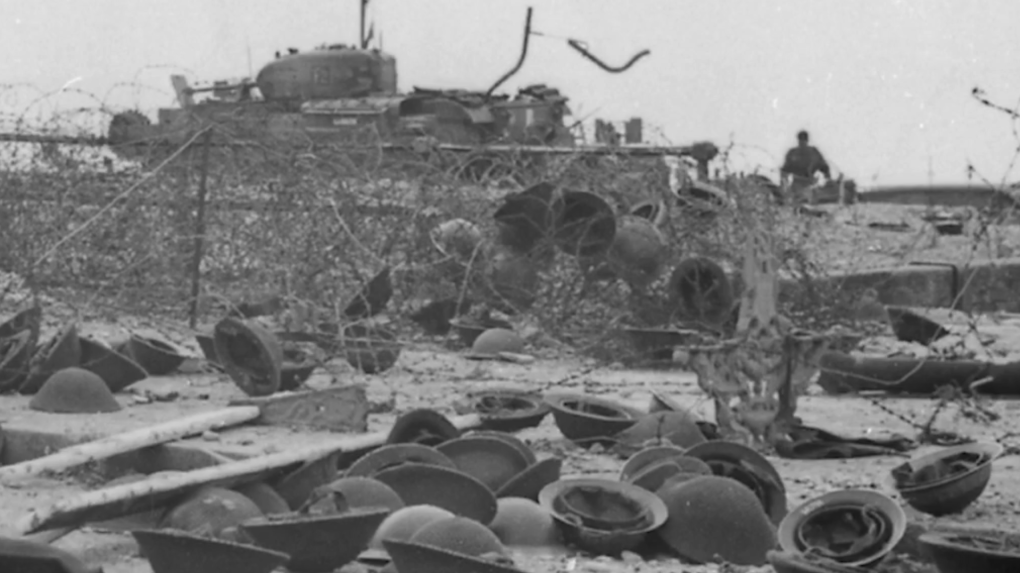 Aftermath from the 1942 Dieppe Raid, where more than 800 Canadians perished in a single day. (Juno Beach Centre)

Friday marks 80 years since the Dieppe Raid, and a campaign to remember fallen soldiers in one of the Canadian military's darkest day has postcards being sent to hundreds of addresses across the country.

Two homes in Saskatoon are being sent postcards from the soldiers who lived at those addresses: Signalman Arthur Keith Adams and Flight Sergeant Ronald Harvey Loyns.

The 1942 Dieppe Raid was considered a disaster by many historians, including Juno Beach Centre executive director Alex Fitzgerald-Black.

“In a span of just under 10 hours, 800 Canadians were killed in action,” he said. “A further 100 or more Canadians would die of wounds suffered from the Dieppe Raid.”

Fitzgerald-Black says the day stands out in Canadian military history, but not as a victory.

“It was the highest loss of life for Canada in a single day during the Second World War,” he said. “That’s why we call the Dieppe Raid the darkest day.”

To mark the 80th anniversary of the raid, the Juno Beach Centre Association researched the 900 soldiers who perished and were able to find mailing addresses for exactly 400 of them that exist today.

Postcards sharing the life, death and service record of the soldier who lived there for the current homeowner to remember.

“On Aug. 19, 1942, Sergeant Loyns departed in formation on an operational flight over Dieppe,” said Fitzgerald-Black. “Enemy aircraft attacked the formation in the mid afternoon, and Sgt. Loyns’ Spitfire was seen shot down into the sea 10 miles northwest of Dieppe around 3:15pm on Aug.19. After this date, Loyns was reported as missing in action. Ronald Harvey Loyns’ body was not recovered, and he is honoured at Runnymede War Memorial in England.”

Arthur Keith Adams was born in Caron and had been educated at what is now Saskatoon Polytechnic and the University of Saskatchewan before enlisting. He was serving as a Signalman during the raid.

“A member of the 2nd Canadian Divisional Signals, Arthur Adams was attached to The Royal Regiment of Canada at Dieppe on Aug. 19, 1942,” said Fitzgerald-Black. “He was originally reported missing, but was later said to be killed in battle. His cause of death is unknown, and he is buried at Brookwood Memorial in Surrey.”

While only two homes in Saskatoon are receiving these commemorative postcards, Fitzgerald-Black hopes this campaign will educate more people about the resilience and the sacrifice of the Canadian soldiers during the Dieppe Raid in the Second World War.

“At the end of the day, their efforts ensured that we had at least a chance to build a better world,” he said.