It’s been seven days since 74-year-old Lois Chartrand went missing while mushroom picking in the forest north of Smeaton, Sask.

“You always have hope. I don’t know if I could survive out there for four or five days, now it’s six days,” her husband Lorne Terry said on Wednesday.

The Whitefox, Sask. couple has picked and sold mushrooms, fiddleheads and wild berries for many years.

“This is one of the only things she loved doing,” said Terry about his wife.

He says Chartrand is familiar with the area and has been harvesting there for 30 years.

Chartrand’s son in-law Barry Legault said the ordeal has been difficult for Terry and everyone who knew Chartrand.

“It’s just devastating and we’re mystified. There’s not a trace of her. It just doesn’t make any sense," Legault said. 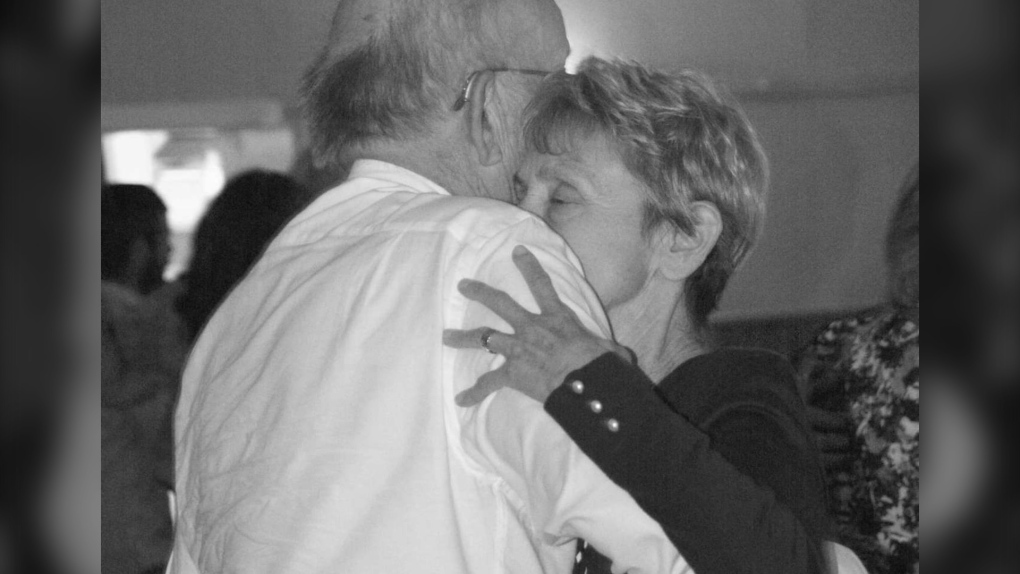 Lois Chartrand is seen dancing with her husband in an undated photo. (Courtesy Barry Legault)

Legault said family members flew in from Ontario upon hearing Chartrand was lost.

According to RCMP, Chartrand was reported missing on Aug. 4.

Chartrand and a friend rode a quad down a trail into the forest and then set out on foot with pails to pick mushrooms. They lost visual contact with one another while picking mushrooms.

Chartrand was last seen around 11:00 am that morning.

The friend was in contact with Chartrand on two-way radio. He tried to guide her out by sounding the horn on a vehicle.

Once on scene, police were also in contact with Chartrand on the two-way radio.

RCMP was last able to communicate with Chartrand via radio at 6:00 a.m. on Aug. 5.

Police say severe thunderstorms, wind and rain came through the area the night she went missing and impacted the search, including knocking down a search drone from above the trees.

“We are making every attempt to find Lois and return her to her family,” said RCMP Staff Sergeant Conrad Logan.

“Lois has been in the bush before and turned around and was able to make her way out but just in this instance it’s unfortunate she hasn’t been able to make it out on her own yet.”

The initial response to the call included members of Saskatoon Search and Rescue, RCMP search and rescue and local people familiar with the area.

An RCMP helicopter and the Saskatoon Police Service's plane equipped with thermal imaging have flown the area but were unable to locate Chartrand.

Police dogs and people on horseback are also involved in the ongoing search.

RCMP said they will continue to search the area. So far, people on foot have searched an 11-square-kilometre area.

Logan estimates more than 100 police, trained search crews and volunteers have scoured the area, including members of the Saskatchewan Public Safety Agency and various firefighters.

He says there is no cell phone coverage at the site where Chartrand went missing.

The area is thick bush, swamp and muskeg.

“The terrain is quite challenging out there,” said Logan.

On day seven of the search, RCMP Staff Sgt. Logan says they are asking volunteers not to participate in order to allow police service dogs to search a wider area.

“We reassess our plan every day at the start of the shift and at the end of the shift,” he said.

Having only police dogs and their handlers in the area makes it easier for the dogs to do their work,  Logan said.

Terry said as time passes, his concern and worry for his wife grows.

Chartrand is described as 90 pounds and five foot two inches. She was last seen wearing blue jeans and a blue jacket.

Terry says his wife is a “very private” person and she would be overwhelmed by the attention the ordeal has generated.

“I didn’t even realize that we’d get this kind of support. It’s unbelievable” said Terry while sobbing.

“They’ve all been fantastic.”

RCMP say members of the public familiar with the area are welcome to participate in the search in the days to come.

Volunteer searchers are asked to check in with the manager at the site to ensure search instructions are followed and for their safety.

Poilievre denounces Diagolon 'losers', asks RCMP to look into threat against his wife

Lights out, ovens off: Europe preps for winter energy crisis

As Europe heads into winter in the throes of an energy crisis, offices are getting chillier. Statues and historic buildings are going dark. Bakers who can't afford to heat their ovens are talking about giving up, while fruit and vegetable growers face letting greenhouses stand idle.

Hurricane Ian moved near the Cayman Islands and closer to western Cuba early Monday on a track to hit the west coast of Florida as a major hurricane this week.

The grandmother of an Indigenous teenager whose body was found near a group home in Hamilton told an inquest into his death Monday that his story is not over.