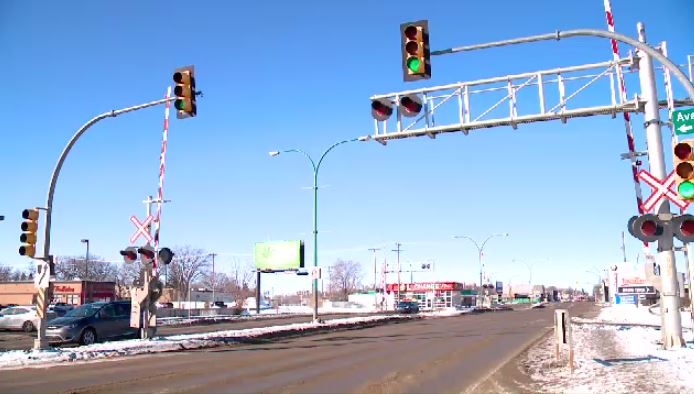 The City of Saskatoon is installing devices at some rail crossings to notify first responders when a train blocks the way.

The City of Saskatoon is installing a device on railway crossings that will inform first responders when a train is blocking traffic.

“The underlying goal is how we can we let first responders know as quick as we can,” acting director of transportation Jay Magus said.

“It doesn’t affect the train movement, but we can get information out. It helps with safety because our first responders can take the right way.”

Police Supt. Randy Huisman said having a device that will “proactively” tell them when a train is coming will benefit officers when dispatching units to a scene.

“In emergency situations, you have response times that you want to get to, and the most efficient path of travel would be an unobstructed way to the call.”

The city is also installing signs near the 11th Street and Dundonald Avenue railway crossing that will inform drivers when a train is passing through.

“It’ll tell the driver the crossing is blocked, so you should maybe take a different route,” Magus said.

The pilot project is funded by the federal government. If it’s successful, the city will implement the device on more railway crossings, Magus said.