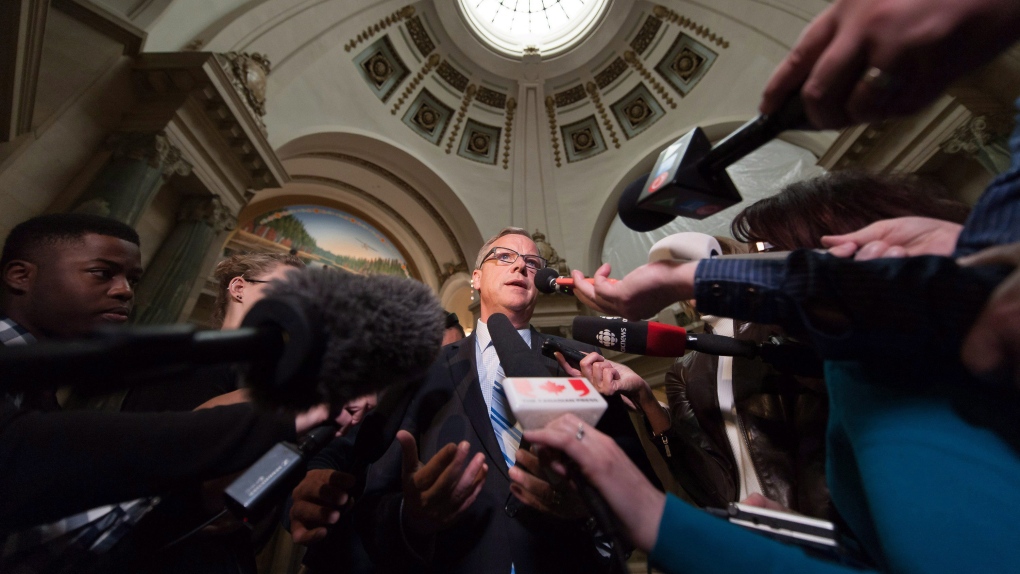 Brad Wall speaks to media one day after the Saskatchewan Party's electoral victory at the Legislative Building in Regina on Tuesday April 5, 2016. THE CANADIAN PRESS/Michael Bell

OTTAWA -- The chairman of Canada's Ecofiscal Commission has a message for Brad Wall as the Saskatchewan premier and high-profile carbon-tax opponent embarks on his third straight majority mandate.

"If you have a stated goal to reduce greenhouse gas emissions -- and Saskatchewan does -- the most cost-effective way to do it is carbon pricing. Period," says Chris Ragan, the McGill University economist who acts as the non-partisan commission's chief spokesman.

And unless Saskatchewan abandons its objective, Ragan says he'll keep talking about why the province should go the carbon pricing route.

The commission is an independent, privately funded think-tank with one overriding goal: to start putting a price on pollution while reducing taxation on income, employment, profits and other things Canadians actually want more of.

In its latest report, released Wednesday, the commission steps past Wall's frequent objections to carbon pricing and goes directly to existing provincial systems that already are, or soon will be, generating billions in government revenues.

Ontario says its coming cap-and-trade market will raise $1.9 billion annually. B.C.'s carbon tax generated $1.2 billion in 2013-14 (all returned in tax cuts and rebates). And Alberta is projected to reap north of $3 billion a year from its new carbon tax.

Smart, transparent, rules-based public policy detailing how governments "recycle" those carbon revenues will be the key to public acceptance and approval, argues Ragan.

The report is titled "Choose Wisely" because different provinces should use the revenues in different ways, depending on their circumstances.

"We don't want to shy away from those."

The commission aims to identify the challenges and quantify them. Carbon revenues, whether through a direct carbon tax like B.C.'s or a cap and trade market like Quebec's, can then be used to address those issues.

That still leaves cash in hand, says the report, which can be used to cut corporate or personal taxes, support clean technology, build infrastructure or pay down debt -- whatever the government determines is most in the public interest.

And governments should not just dictate their priorities, and leave it at that.

"If you're going to give the money back to households, tell us why," said Ragan.

Governments are already spending public dollars on climate change, from disaster assistance to industrial subsidies such as Saskatchewan's public support for carbon capture and storage technology.

Wall, in a post-election scrum Tuesday in Regina, presented a more nuanced view on carbon taxes than in the past.

"We haven't ruled it out ourselves in the long term," Wall said. "A price on carbon, effectively we kind of have one because we're selling CO2 right now to oil companies out of Boundary Dam 3," he said, referring to a carbon capture project.

"But in terms of a broader application of a price, that's possible down the road but it's not right now."

The 13 provinces and territories are currently in a six-month research phase looking at a quartet of broad climate policy measures with the federal government, including carbon pricing.

Ragan, for the record, doesn't buy the argument that Saskatchewan's carbon capture technology actually prices carbon, although he applauds Wall's government for funding the initiative.

He believes the debate over carbon pricing has moved beyond yes or no arguments, as evidenced by the commission's detailed report on what to do with actual new streams of revenue.

"We are talking more about how to do it, rather than whether it should be done at all," said Ragan. "And provinces are actually doing it."