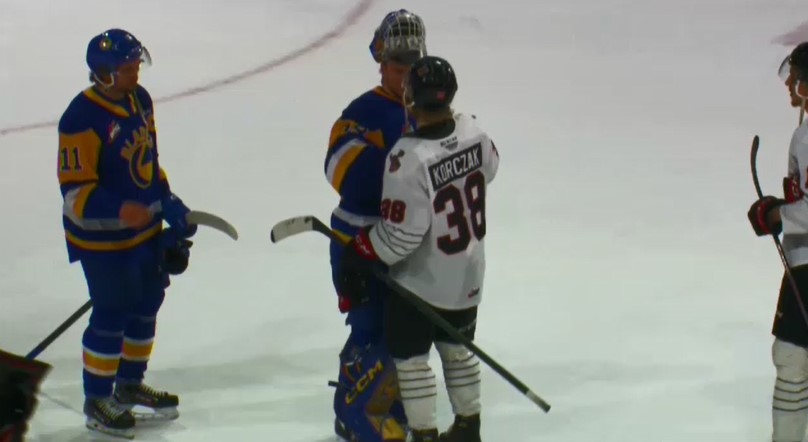 The Saskatoon Blades and Prince Albert Raiders were bounced from the WHL playoffs Friday night.

Both teams needed to win to stay alive in their quarter-final playoff series.

The Saskatoon Blades entered game five down 3-1 in their series against the Moose Jaw Warriors.

Jagger Firkus and Denton Mateychuk each lit the lamp for Moose Jaw to give the Warriors a 2-0 lead in the first period.

Saskatoon clawed back with a power-play goal from Josh Pillar to cut the lead in half.

Firkus would get his second of the game nearly half way through the second period to restore the two goal Warrior lead.

But the blades would answer back just over four minutes later, as Josh Pillar also notched his second of the game, making the score 3-2 for Moose Jaw.

Trevor Wong had a goal in the third period of Saskatoon, but it was not nearly enough as the blades fell 6-3, losing the series 4-1.

The Prince Albert Raiders were also knocked from the playoffs on Friday, after being crushed by the Winnipeg Ice.

Winnipeg scored four goals in the first period, while only allowing the raiders one shot on net in the opening frame.

After an early second period goal by Winnipeg, the Raiders would finally get on the scoreboard courtesy of a goal from Reece Vitelli.

The Ice would add three more goals in the third period to easily cruise to a game five victory and eliminate the Raiders.

Lives were 'shattered' when Kabul fell into Taliban hands, and thousands remain in limbo, unable to return to Afghanistan. CTV News' Genevieve Beauchemin recalls her visit to makeshift refugee camps set up in Pakistani parks, and the stories she heard during that time.

The world’s largest international Arctic sporting event is underway in northern Alberta, where athletes compete in unique games significant to the cultural identity of the North.