Earlier in the day, Saskatoon police advised of potential traffic headaches due to the convoy's planned trip through the city.

"Police are aware of a trucking convoy travelling towards Saskatoon in protest of pandemic-related restrictions," Saskatoon Police Service (SPS) said in a social media post.

The convoy, which is part of a larger protest movemment, is in reaction to the recent introduction of new COVID-19 vaccine requirements for cross-border commercial truck drivers.

As of 2 p.m. Monday, CTV News observed around 500 people gathering at the Flying J Travel center on the north edge of the city. About 30 semis could be seen, although it was not clear if all of the vehicles were part of the event.

Some of the protestors held signs with messages such as "I stand with truckers for our freedom!" and "end vax mandate."

"Most of our institutions are all corrupt and are all saying the same thing. Not a single person will stand up and the ones who do get cancelled or they lose their job," Melanie Beaudoin, who was on her hand to show her support, told CTV News.

"At this point, anybody who's willing to stand up, they're risking everything. So we all have to stand together," Beaudoin said. 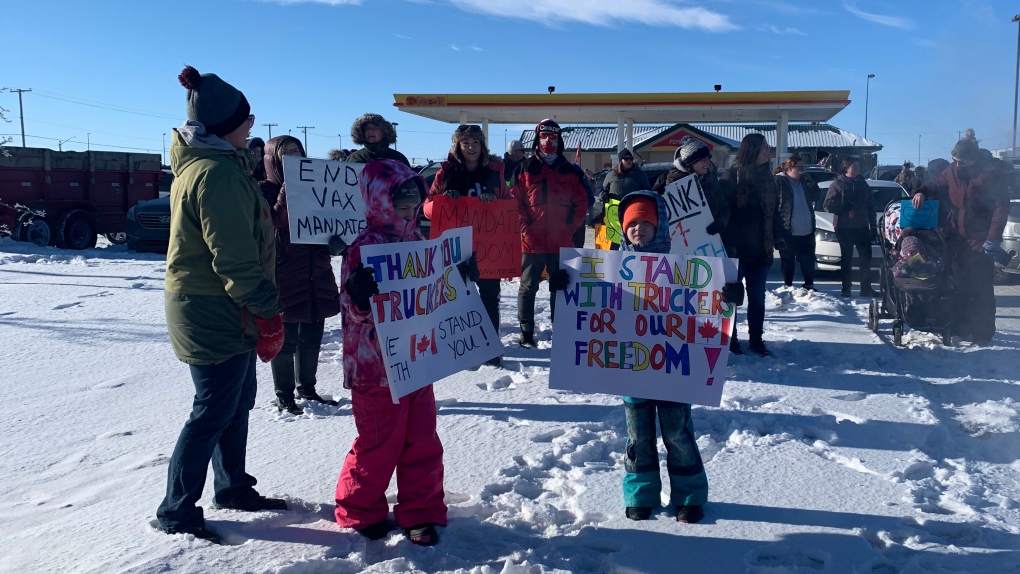 While in its social media post earlier in the day SPS said the group was expected to head south on Idylwyld,  the convoy only briefly travelled down the busy thoroughfare before it turned on Circle Drive, eventually heading out of the city.

Many of the vehicles were expected to head to Regina with another fleet of trucks reportedly heading towards Saskatchewan's capital from Medicine Hat.

The Canadian Trucking Alliance has come out against the protest convoy, in a statement saying "the vast majority of the Canadian trucking industry is vaccinated" with the industry's vaccination rate mirroring the general public's.

"The (CTA) does not support and strongly disapproves of any protests on public roadways, highways, and bridges."

In addition to Ottawa's vaccine mandate for drivers, the U.S. is now requiring full COVID-19 vaccination for any non-citizen entering the country — even for essential travel.

“The Government of Canada and the United States have now made being vaccinated a requirement to cross the border. This regulation is not changing," Laskowski said.

“The only way to cross the border, in a commercial truck or any other vehicle, is to get vaccinated.”

During a COVID-19 news conference in held in Regina Monday morning, when asked about the convoy, Saskatchewan premier Scott Moe called the new federal vaccine policy for truckers "unnecessary."

"Our truckers were going back and forth throughout this pandemic. They've done so, I think, largely in a very safe manner and they are an essential service," Moe said.

Earlier in the day, around 40 vehicles, including two semis, were seen at a Co-op Cardlock gas station in Prince Albert.

Rick Sproull, a recently retired truck driver, said he wants to see an end to vacciantion manadates across the country.

"Stopping the segregation that’s happening amongst people," he said. 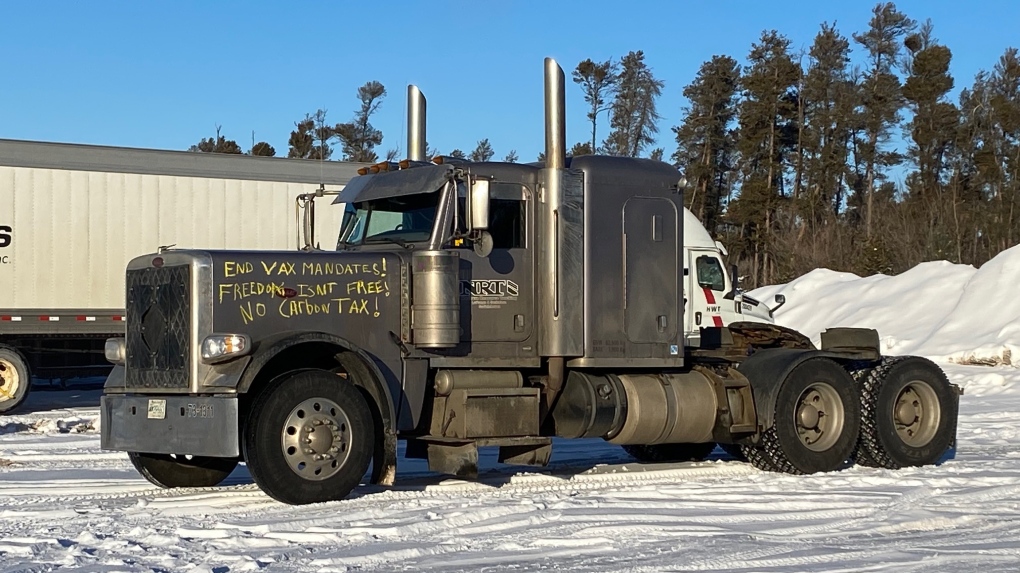 Roughly half the participating vehicles were later seen departing towards Saskatoon to join the protest convoy.

With files from Lisa Risom and Tyler Barrow.

Quebec ready to vaccinate against monkeypox as soon as Friday, with 25 confirmed cases

Quebec is ready to vaccinate people who have come into close contact with monkeypox as soon as Friday.

Canada Soccer has cancelled a planned friendly with Iran in the face of growing criticism.

The inquiry into the 2020 mass shooting in Nova Scotia is hearing today from a retired senior Mountie who has been granted special accommodations to ensure he is not re-traumatized by having to relive the tragic, 13-hour event.

Patricia Tomasi, the co-founder of the Canadian Perinatal Mental Health Collaborative, is raising awareness on postpartum psychosis and how new moms can find support.

Gun control measures are likely going nowhere in U.S. Congress, and they also have become increasingly scarce in most states. Aside from several Democratic-controlled states, the majority have taken no action on gun control in recent years or have moved aggressively to expand gun rights.

Eleven newborn babies have died after a fire that broke out in the neonatal department at the Mame Abdou Aziz Sy Dabakh Hospital in the western Senegalese city of Tivaouane, said the country's president Macky Sall on Thursday.