SASKATOON -- Emails obtained by the Saskatchewan NDP reveal the provincial government flagged concerns about the roof of Saskatchewan Hospital North Battleford – well before it started leaking.

Two months later, the province announced the entire roof would need to be replaced because of leakage issues.

However, an email sent by SaskBuilds project director Jill Zimmer shows there were concerns about the roof during the construction period.

“I just wanted to make you all aware of an evolving issue at SHNB (Saskatchewan Hospital North Battleford), in case it appears in the media,” Zimmer wrote to colleagues.

“With the spring thaw, some major issues with the roof at SHNB have come to the forefront. The roof was a serious bone of contention during design and construction, and unfortunately, the authority's concerns were well-founded."

SaskBuilds is a Crown corporation for big infrastructure projects.

Another email, acquired through a Freedom of Information request, reveals there were 20 different roof leaks days after the hospital’s grand opening.

The email was sent by Derek Miller, the executive director of infrastructure management for the Saskatchewan Health Authority.

“SHNB is experiencing over 20 different roof leaks with snow melting … we are fortunate this didn’t occur last week, before the grand opening.” 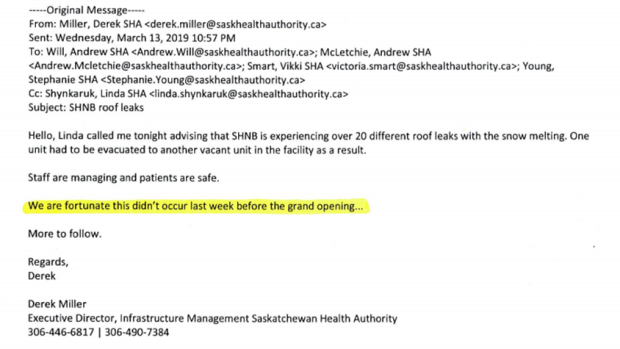 Saskatchewan NDP leader Ryan Meili questioned why contractors built the roof, even after concern was raised by Zimmer.

“All of this adds up to a story, and the document trail shows, the concern was about the ribbon cutting. The concern was about getting this announced and open and being a big deal, instead of making sure it was properly done, safe, well done – from day one,” Meili told reporters on Tuesday.

“That to me tells me the priorities are wrong.”

Despite Zimmer’s email, Minister Gordon Wyant said the issues with the roof were discovered after the leak.

“It was not until a spring melt in 2019 that the roof failure was identified,” Wyant, the minister responsible for SaskBuilds, said in an email to CTV News.

“We understand repairs are underway to fix the deficiencies that have been identified.”

The leaky roof wasn’t the only issue with the North Battleford hospital.

In October, the province put up signs around the facility warning staff and patients not to drink the tap water.

An audit of the facility is scheduled to be completed in the spring.