SGI is reminding Saskatchewan residents to buckle up through this month’s Traffic Safety Spotlight.

Its campaign features the mother of a three-year-old girl who survived a head-on collision near Wakaw in November 2019.

Jasmine Draude said three-year-old Kinsley and her grandpa were in the vehicle when it was struck. When Draude got the call, she rushed to the scene, thinking about how she had just strapped Kinsley into her car seat a few minutes earlier.

“Did we do the tether strap at the back? I knew that no airbags could get her except for the side airbag, and that did get her hand because she stuck her hand up by her face (to protect her face at the time of impact), but the car seat curves so it protects her face from the airbag,” Draude told CTV News.

Draude said she was the third person on scene. Thankfully, when she arrived, Kinsley was still strapped in, crying in her seat.

The child was taken to a Saskatoon hospital for an assessment of possible internal trauma, but she only sustained minor cuts and bruises.

Draude said Kinsley went to counselling, struggling with emotional trauma. She had a difficult time sitting in a car seat after the accident and didn’t want to drive on the highway, said Draude. 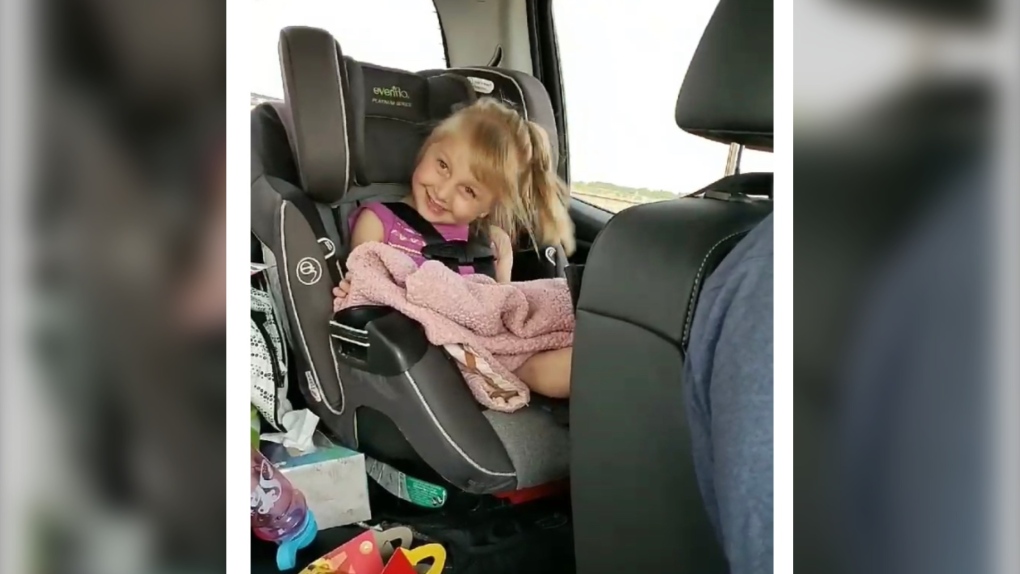 Three-year-old Kinsley survived a head-on collision, partly thanks to being properly strapped into her car seat. (Jasmine Daude/Submitted)

Kinsley’s grandfather, who was driving at the time of the incident, was flown to Saskatoon by STARS Air Ambulance and has since recovered.

Draude said she’s happy that police will be focusing on seatbelt and child restraint violations throughout the month of June.

Tyler McMurchy, media relations manger with SGI, said this month’s focus is also educating people about proper restraints. As part of the campaign, SGI will be sharing tips and resources for families who are ready to make a change in how they buckle up and a commitment to always buckle up, even on short trips.

McMurchy said a ticket for being improperly buckled costs $175 and three demerits on your driver’s license. He reminded drivers that they are responsible for everyone in the vehicle and could bear the cost of all passenger tickets.

Child seats are mandatory for all children in Saskatchewan who are:

Children ages 12 and under should always sit in the back, away from where the front airbags deploy.

SGI will be featuring more tips and videos about car seats and seatbelts throughout the month of June on its social media accounts.

Man charged with smuggling pythons in his pants at Canada-U.S. border

A New York City man has been charged with smuggling three Burmese pythons in his pants at a U.S-Canadian border crossing.