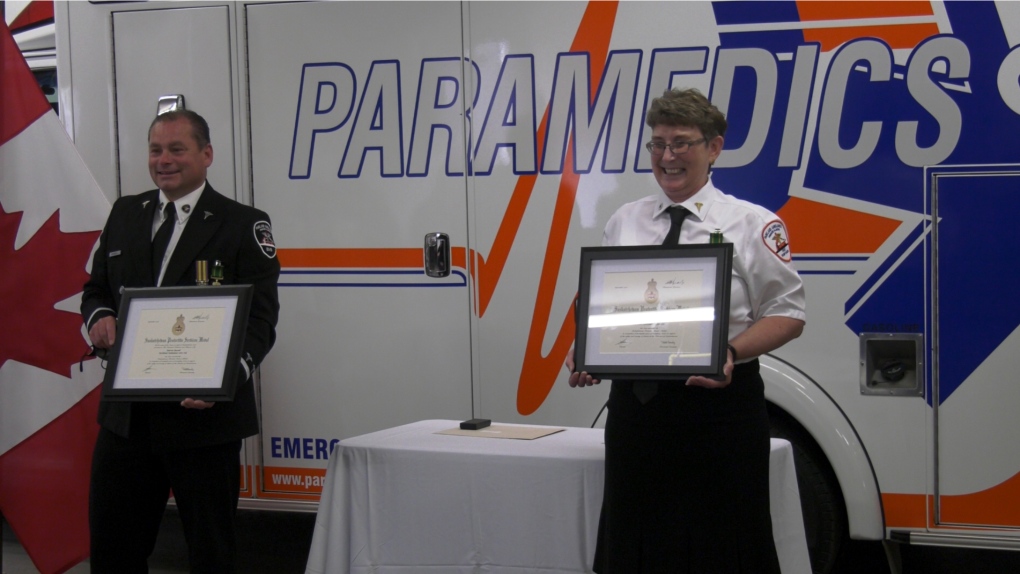 Allison Irvine, a first responder, and Darren Russell, an advanced care paramedic, were chosen to receive the honour for their dedication to the EMS field in Saskatchewan.

Irvine becomes the first medical responder to be given the medal.

Her father was the fire chief in Shellbrook in 1993 when she joined the Shellbrook Volunteer Fire Department.

“It was a particularly bad year for accidents and we never had anyone really trained to do the medical side and then I read in the Shellbrook Chronicle about a program the Parkland Ambulance offered,” said Irvine.

That prompted her to take advanced medical training. Since then she’s spent 27 years serving the community of Shellbrook and area.

“It’s a passion that I have, and as long as I can still feel and help people in their time of need, that’s all the motivation I need,” said Irvine.

Russell has worked as a primary care paramedic with Parkland Ambulance in Prince Albert for 25 years.

“I’ve never been in this profession for an award. It’s just a privilege and honour to be able to work for a Parkland Ambulance and the heath authority,” said Russell.

He says he first got into the profession because he enjoyed helping people.

The Saskatchewan Protective Services Medal is an honour given to protective services providers and focuses attention on the efforts and work of police, fire and emergency professionals, and others working in the field of safety and security.

Recipients must be personnel with 25 years of service in Saskatchewan.

Quebec Cardinal Marc Ouellet, once considered a front-runner to become pope, has been accused of sexual assault and is among a list of clergy members and diocesan staff named in a class-action lawsuit against the archdiocese of Quebec. A woman identified as 'F.' in court documents tabled on Tuesday accused Ouellet of several incidents of unwanted touching.

A 12-year-old player in the Little League World Series is in critical condition after falling from a bunk bed at the players' dormitory in Williamsport, Pennsylvania, his team tells CNN.

The wolves that were found outside their enclosure at the Greater Vancouver Zoo Tuesday appear to have been freed on purpose, according to officials.