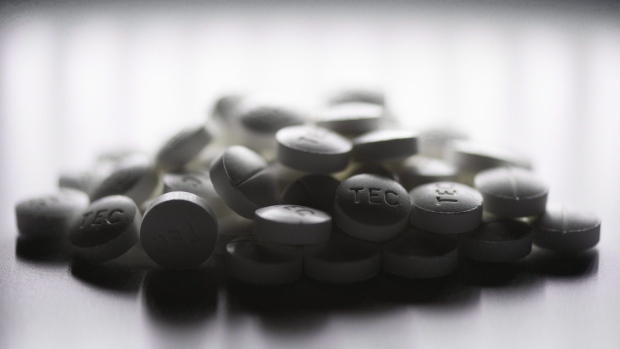 The College of Physicians and Surgeons of Saskatchewan (CPSS) is warning of a highly potent opioid detected in the Saskatoon area.

The synthetic opioid, known as etonitazene, can be seen in the form of an orange powder or grainy substance.

Etonitazene produces a similar euphoria and relaxation effects as other opioids, like morphine and fentanyl.

The CPSS said the substance is “10 to 20 times more potent than fentanyl.”

Because of its strength, the chance of overdose is increased and stronger doses of naloxone may be required.

“There is a significant risk of overdose due to its potency which may require greater than normal doses of naloxone in the event of an overdose,” the CPSS warned in a statement.

The CPSS said etonitazene is “newly encountered” in Saskatchewan and is circulating in the Saskatoon area.

He said officers have had to administer naloxone twice as much in 2021 than last year.

“We’re seeing an increased drug presence in the community,” Cooper said, adding that drug seizures have increased 7 per cent.

The Saskatoon Fire Department said overdose calls come in bursts. Emergency crews can respond to 40 to 100 overdose-related calls per month.

Rob Hogan, the fire department’s deputy chief of operations, said responding to fentanyl and other opioid overdoses can put first responders at risk.

“Because of the high potency of this, just a small amount of it, if it touches your skin, or you breathe it in — it could affect you,” Hogan said.

Hogan said synthetic opioids can be so potent, he’s heard of situations where paramedics and firefighters having to administer naloxone to themselves, after responding to an overdose.

In May, Toronto was alerted of etonitazene circulating in the city as well.