Some COVID-19 outbreaks still listed as active on Sask. government website long after they were declared over 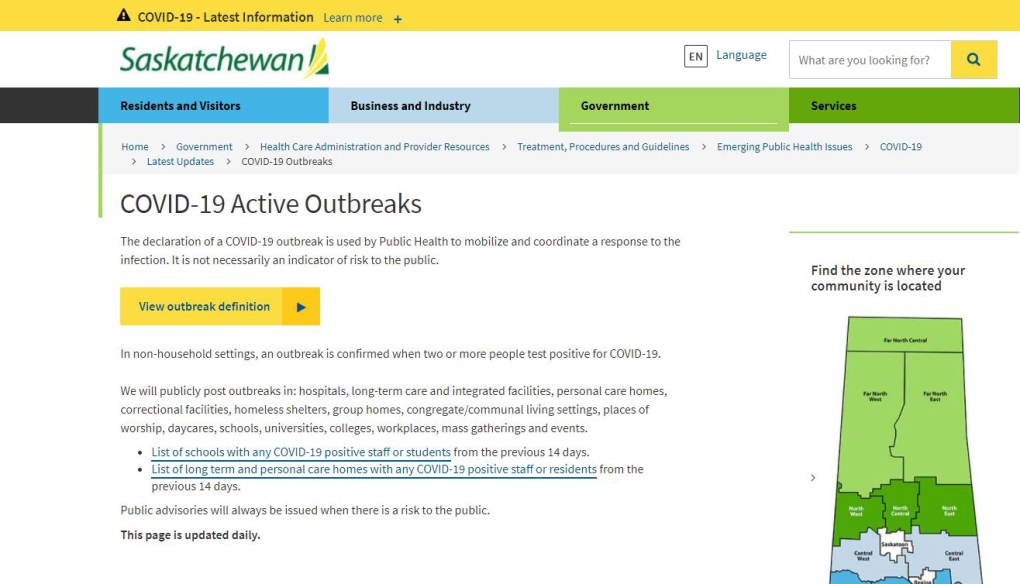 SASKATOON -- A provincial website that publicly posts active COVID-19 outbreaks in Saskatchewan may not be being kept up to date — with some outbreaks lingering long after they were declared over.

It's the kind of error a public health expert says can undermine the public's trust in the fight against COVID-19.

"From the public’s perspective, accurate information is the backbone of the battle against COVID-19," said Dean Eurich, director of clinical epidemiology at the University of Alberta School of Public Health.

A quick scan of the provincial government's website reveals the names of restaurants, workplaces, organizations and government facilities where a COVID-19 outbreak has been officially declared by a medical health officer.

While the website indicates it is "updated daily" and says that outbreaks will remain on the list until "officially declared over" by a Saskatchewan Health Authority (SHA) medical health officer, CTV news has uncovered at least three instances where this was not the case.

As of March 1, an outbreak involving Saskatoon Provincial Correctional Centre, originally declared on November 17 was still on the list.

After CTV News requested an update concerning the outbreak, an SHA spokesperson said it had been declared over on Jan. 26 — over a month prior.

Another outbreak listed on the website as of March 1, involving the SaskTel Centre Hockey League that was first declared on Nov. 29, had also been declared over as of Jan. 7.

Both outbreaks were removed from the website after CTV News inquired about their status.

Another outbreak listed on the website as of March 4, at Saskatoon Police Service (SPS), was initially declared on Dec. 21.

However, according to an SPS representative, the SHA said the outbreak had been declared over in a Feb. 25 letter.

When asked how many other outbreaks on the website were still listed, despite being declared over, the SHA said it could not fulfill CTV News' request.

"The ability to have appropriate, accurate and trusted information from the public’s perspective is extremely important because they need to have trust," Eurich said.

"As a government organization, they have to ensure that the information they are giving the public is accurate because otherwise, you end up with disinformation that results in polarizing public debates of just how bad the COVID-19 outbreak is."

In an emailed statement, an SHA spokesperson told CTV News it works with the Ministry of Health to provide information about COVID-19 outbreaks in Saskatchewan.

"While we work to keep the information current, we recognize that there are sometimes delays in updating the information, particularly removing outbreaks that have been declared over," the spokesperson said.

"These organizations and locations are informed about their outbreak status directly by local public health officials or the Medical Health Officer."