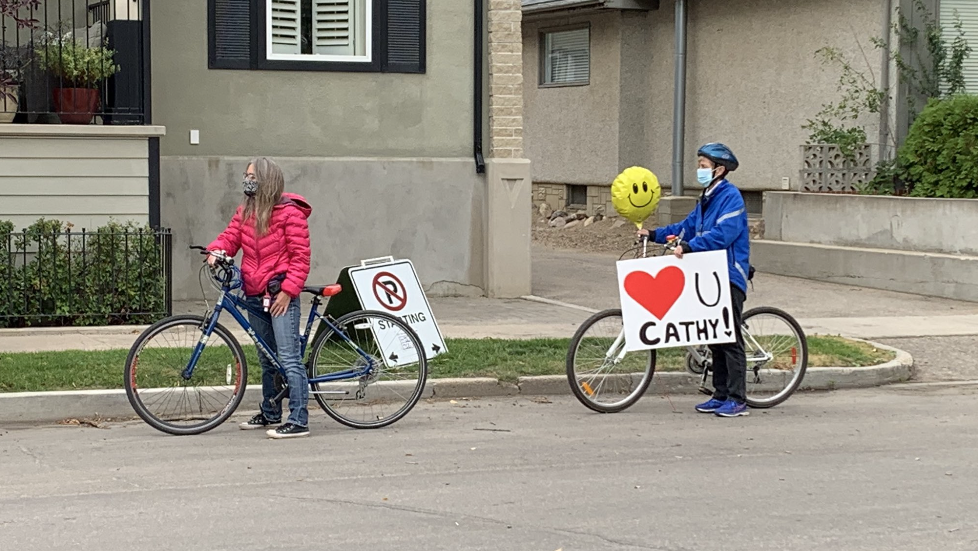 SASKATOON -- Known for her infectious enthusiasm and love for life, hundreds of friends and family hopped on their bicycles for a slow-roll bike ride, honouring Cathy Watts, a longtime voice for the cycling community.

“Cathy is somebody whose optimism and enthusiasm is infectious,” said Hilary Gough. “She’s been part of all the major changes in cycling in Saskatoon over decades and her impact will be felt for decades to come.”

Last week, Watts suffered a serious stroke. The family said it came as a shock. Watts is at home in palliative care surrounded by her family.

Watts is widely known for her contributions to the active transportation network in the Bridge City. For a decade she served as a board member for Saskatoon Cycles, lending her voice to changes in the city’s cycling network.

On Monday, hundreds of cyclists gathered for a slow-roll starting at D’Lish Cafe, navigating to Watts’ home where friends passed by her window, wishing her all the best and thanking her for all her hard work.

The group then walked their bikes through Cathy’s backyard to say hi to Cathy at the window. Friends and family are all there with her and some family even joined via Zoom. Cathy can be seen smiling and waving at everyone who walked by. #YXE pic.twitter.com/hBOkz6fHd5

“We are absolutely startled and shocked by what’s happened,” Arnold said.

Arnold said Watts was a strong voice when Saskatoon embarked on building more active transportation in the city. Watts was a physical therapist before retiring, but friends said she never lost her passion for encouraging activity in the community.

“About nine or 10 years ago there was a notion that Saskatoon needed to have much more active transportation as we were very car-centric and we needed to encourage people to move because when we move we are connected through community with each other. One of her impacts was to promote all of that,” Arnold said.

After learning about the stroke, Gough said she started thinking about what she could do for Watts, knowing her friends and family would love to show support for her.

And the bike ride in honour of Cathy Watts is on the move. The line just keeps going! #YXE pic.twitter.com/SSjx1r2ZXg

“I feel really grateful for everyone who has come out and I’m not surprised. People love to show support for cycling, but also because Cathy is someone who makes others feel seen and welcome,” Gough said. “I know people want to show Cathy that we love her and that we’re grateful that she’s made a huge impact on our community.

“I know she’ll hear us and feel our love.”

Cathy Watts is one of the most determined, hopeful and engaged citizen leaders I know.


She has such a big ❤️ for this city and all of us. (She also saved me when my back went out a couple of yrs ago). I’ll be there for the slow roll, rooting for the whole Watts family. #yxe https://t.co/lxj59cyihh