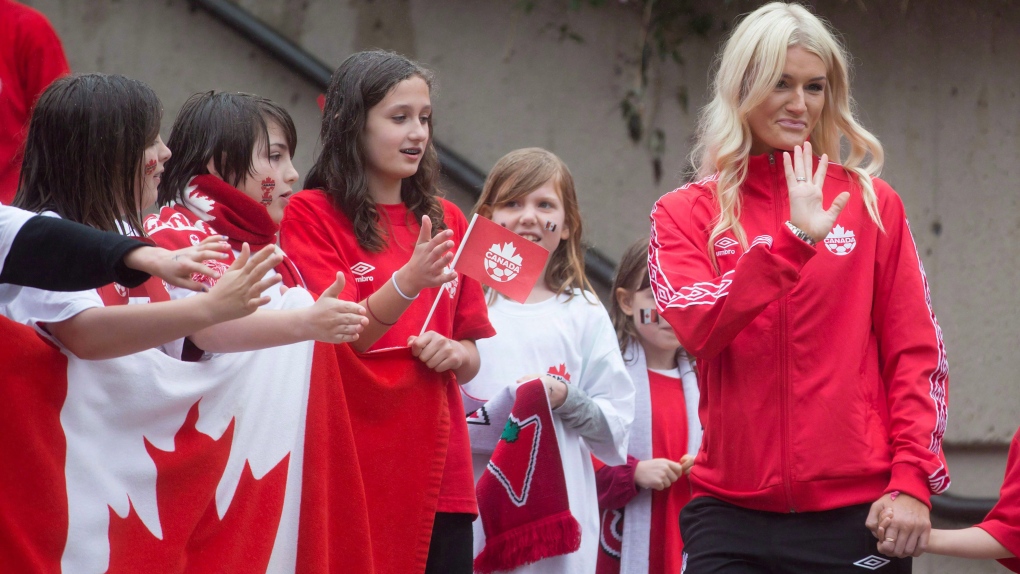 Kaylyn Kyle, of Saskatoon, is introduced during the announcement of the Canadian national women's soccer team roster for the 2015 FIFA Women's World Cup, in Vancouver, B.C., on April 27, 2015. THE CANADIAN PRESS/Darryl Dyck

TORONTO -- Midfielder Kaylyn Kyle, who won 101 caps for Canada and a bronze medal at the London Olympics, has retired from international soccer.

The 28-year-old from Saskatoon made the announcement via social media, calling it a bittersweet day.

"I have been able to represent Canada over 100 times at the highest level," she said. "Playing in two under-20 World Cups, two Women's World Cups, an Olympic Games, Pan American Games and many more tournaments along the way.

"Thank you for the incredible ride!"

Kyle last played for Canada on home soil at the 2015 World Cup, winning her 100th cap coming off the bench against Switzerland before appearing a substitute in the quarter-final loss to England. She was a non-travelling alternate for the Canadian team that won bronze at last summer's Rio Olympics.

"I don't think I'm done playing for Canada at all. I think I still have a few more years left in me," she said prior to Rio. "It's just keep working hard here and keep performing with my club so I can get called back in."

But Kyle was released by the Orlando Pride of the NWSL prior to this season after she was not one of the Canadians allocated to the league -- meaning subsidized -- by the Canadian Soccer Association.

In London, the energetic midfielder started two games and came off the bench for four more in Canada's bronze-medal run at the 2012 Games.

An entrepreneur off the field, Kyle has worked with headphone manufacturer Beats by Dre, Under Armour and Golazo, an organic drink company based in Seattle. She also runs soccer camps.

Kyle's father, Doug, played hockey, scoring 55 goals and adding 58 assists for a 1983-84 Saskatoon Blades team that included Wendel Clark and Joey Kocur. He signed with the Edmonton Oilers but, unable to crack a championship roster, spent three seasons in the International Hockey League