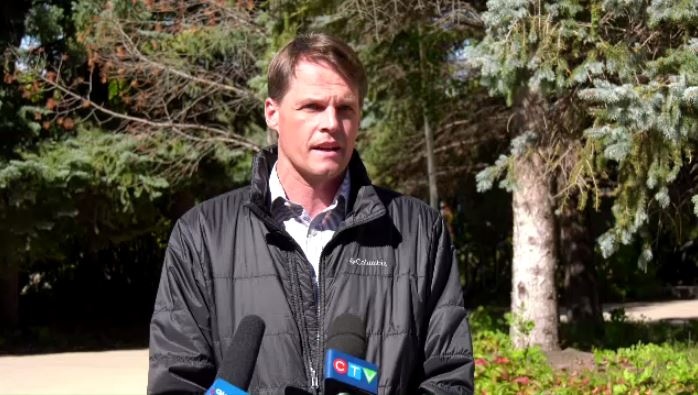 Saskatoon Mayor Charlie Clark has joined 17 other mayors from across the country asking federal party leaders to take action on housing and homelessness.

They penned an open letter to five federal party leaders calling for urgent action on housing as voters head to the polls on Monday.

“Homelessness and housing need have not always existed on the scale we see today. The rise of homelessness and so many living in unaffordable, unsafe housing is the direct result of federal withdrawal from investment in affordable housing and social services starting in the 1980s. This situation was created by federal policy, and it will take federal leadership to reverse its devastating consequences,” the collaborative letter says.

The letter endorses a six-point “Vote Housing” platform which includes calling for a commitment to the prevention and elimination of homelessness, and to commit to supportive housing. It also calls for expanded rental assistance for low income households.

Some of the cities represented in the letter include Winnipeg, Edmonton, Quebec City, Regina, Calgary, Montreal, Halifax, Toronto, Vancouver and Ottawa.

A news release from Clark’s office says the mayors who signed the letter represent over 13.6 million people across Canada.

The federal government is planning to unveil its plans for a vaccine passport designed for international travel on Thursday, CTV News has confirmed. Prime Minister Justin Trudeau and Finance Minister Chrystia Freeland are scheduled to speak to reporters at 10 a.m. ET, which CTVNews.ca will carry live.

U.S. officials allege Canadian race car driver and Instagram influencer Josh Cartu and his brothers ran a 'massive fraudulent' trading operation between 2013 and 2017 that appears to have helped fund Cartu’s lavish lifestyle through multi-million-dollar transfers to off-shore bank accounts in the Caribbean.

A report exploring the far-right in Ukraine’s military found that neo-Nazis and supporters of far-right groups in the ranks bragged online about receiving training from Canada and other NATO nations.

U.S. unveils COVID-19 vaccine rollout for children as Canada plans its own

U.S. officials have outlined a plan to roll out two doses of the Pfizer vaccine formulated for children aged 5-11 in the coming weeks — provided that the U.S. Food and Drug Administration approves Pfizer’s safety and efficacy data.

Trudeau urged to make decriminalization of illicit drugs a priority

Prime Minister Justin Trudeau is being urged to decriminalize the possession and use of illicit drugs as a way to combat the opioid crisis that has resulted in thousands of deaths in Canada.

Saskatchewan’s Provincial Emergency Operations Centre said there are no plans to transfer more than six patients to Ontario as of Wednesday morning – contradicting information provided by health officials in Ontario.

More than 880,000 Canadians work in industries at risk of decline or closure in the global transition to clean energy, a new analysis says.

Pattie Lovett-Reid: The perfect storm is brewing for cash-strapped Canadians

With inflation soaring, some economists are predicting that interest rate increases won't be far behind. CTV's chief financial commentator Pattie Lovett-Reid looks at what that means for your finances in her latest column on CTVNews.ca.