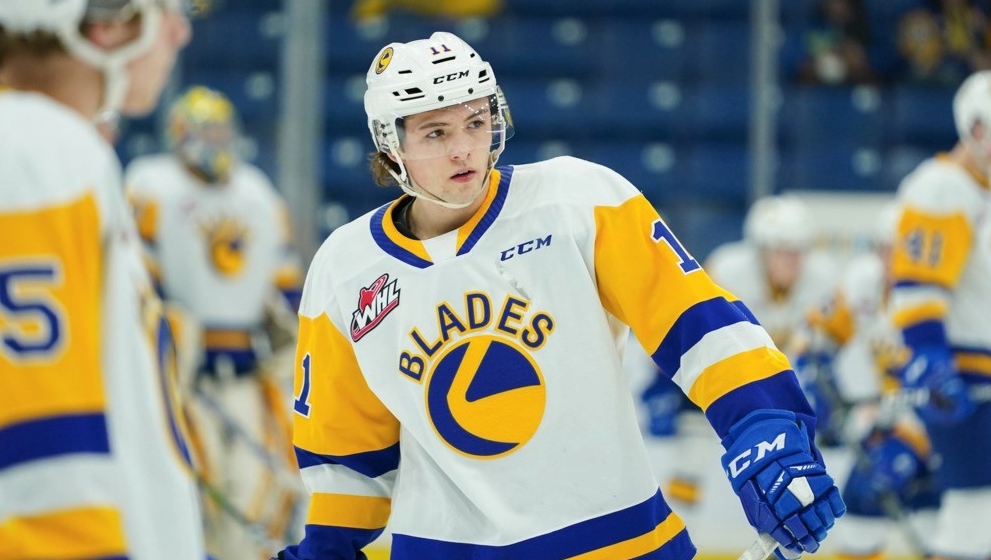 Saskatoon Blades’ 19-year-old forward Tristen Robins is only three games into the WHL regular season and is already living up to the title his general manager bestowed upon him when he returned from his second consecutive NHL training camp.

“He's one of the very best players in our league,” said Colin Priestner. “He'll just be a huge asset to us in all facets, you don't get first-line centres like him dropped in your lap too often.”

In three games with the Blades, the San Jose Sharks’ second round draft pick in 2020 has collected two goals and six assists, and his eight points is tied for the most in the league.

According to his coach and teammates, there are a few key attributes that make Robins an elite talent.

“He's quick,” said fellow overage player Rhett Rhinehart. “Those quick guys that are agile and just quick with their feet—that's definitely a big part of his game.”

Robins has quickly become a big part of the Blades’ offence after being acquired from the Regina Pats in 2018; going from 25 points in his first full season, to 73 points in 62 games with the Blades before the COVID-19 pandemic ended the WHL regular season.

Robins then put up 23 points in just 16 games in the WHL bubble earlier this year.

“I think just the ability to separate himself from everybody else with his skating,” said 20-year-old goaltender Nolan Maier. “I mean he rarely gets touched out there.”

“You just want to go and work as hard as you can everyday and just to get better and better day in and day out,” said Robins. “That ultimately helps the team.”

Robins finished with 33 goals—just 15 back of the league lead—in his 18-year-old season, pairing his quick feet with a quick set of hands.

“For him to have the hands and the headspace that he does, I think it's a big part of his game,” said Maier.

Robins says one of the things he’s learned from skating with the pros at training camp with the Sharks is how to carry himself like a professional.

“I think just the preparation. No matter what day it is, whether it's a game day, an off day, practice day, they're always taking care of their bodies,” he said

“Ultimately that's your money maker and that's what's going to carry you far in this job.”

He says combining the preparedness of a professional player, with the confidence that comes with being in your final year of junior hockey, have contributed to a fearless approach on the ice.

“You know you're going to make mistakes but that's what you learn from and that's also how you correct yourself,” he said.

“Just being calm out there is for sure a good part of my game, and what I take pride in is making plays.”

Sonne says he also has the “poise and confidence” to make plays in high traffic on the ice.

Robins says it’s exciting to be part of the leadership group with the Blades, who hope to build off a run to the second round of the playoffs, when last time the postseason tournament was played in 2019.

“There's a bitter taste in our mouth still from a couple years ago, and that the playoffs were shut off last year,” he said. “We have a really good group in here, and I'm excited to be here and see what we can do.”

Parents of boy, 2, among dead at Fourth of July parade shooting

Aiden McCarthy's photo was shared across Chicago-area social media groups in the hours after the July 4 parade shooting in Highland Park, accompanied by pleas to help identify the 2-year-old who had been found at the scene bloodied and alone and to reunite him with his family. On Tuesday, friends and authorities confirmed that the boy's parents, Kevin McCarthy, 37, and Irina McCarthy, 35, were among seven people killed in the tragedy.

Despite fears of arrest, some Russians refuse to halt war protests

Despite a massive government crackdown on protests against the war in Ukraine, some Russians have persisted in speaking out against the invasion.

An emergency resolution before the Assembly of First Nations annual meeting to reaffirm the suspension of National Chief RoseAnne Archibald has failed in Vancouver.

The Crown is seeking to revoke bail for Tamara Lich, a leader of the 'Freedom Convoy,' after she appeared alongside a fellow organizer in an alleged breach of her conditions.

A man charged Tuesday with seven counts of murder after firing off more than 70 rounds at an Independence Day parade in suburban Chicago legally bought five weapons, including the high-powered rifle used in the shooting, despite authorities being called to his home twice in 2019 for threats of violence and suicide, police said.