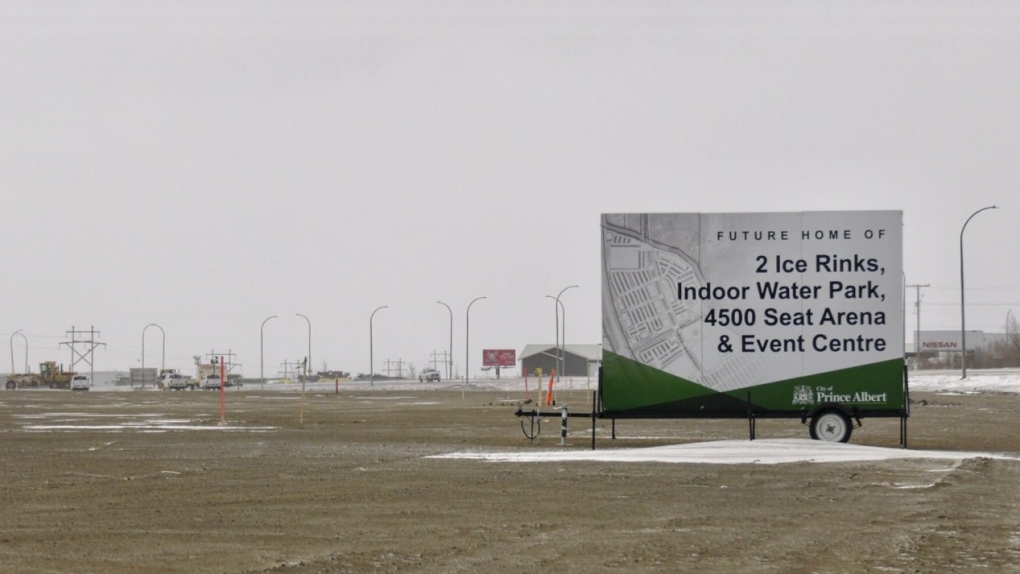 Prince Albert’s future Aquatics and Arenas Recreation Centre will be located on the southeast edge of the city. (Jayda Taylor/CTV Prince Albert)

Mayor Greg Dionne said this was no surprise, even though an architect presented three design options to council back in January.

“The one building was always the plan,” he said.

“Let’s pretend it was today. Do you want to go from one building to another?” He questioned.

“The weather, the wind was 50 km/hr, the snow was blowing. I said ‘That’s why we’ve got to go to one building.’ We have crazy weather in our province, and yesterday was a perfect example.”

The 51,500 sq. ft. aquatics area will have an eight-lane pool, 200 spectator seats, combined leisure, splash and wave pool, a lazy river, whirlpool and two water slides. The two NHL-sized arenas will have a combined 360 seats, with dressing rooms for players and referees.

Dionne and Coun. Don Cody are heading the centre’s fundraising committee with a goal of $15 million, he said.

“We already do have some interest. I don’t want to burst anyone’s bubble, but we will be making a couple big announcements already,” he said.

“I think we can hit the $15 million. That will get all of the projects underway.”

Dionne said he’s been receiving some questions regarding the large amount of seating in the centre, and he said the city wants to have the space to host major events.

“When you build a structure of this size and magnitude and cost, you build it for the future, not today,” he said.

Council voted unanimously in favour of the single-building design, opposed to a “campus” style or a hybrid. Now, an architect will start working on a more detailed design.

There will also be a 14,700 sq. ft. common area at the facility, which will include a multi-purpose room, seating and leasable space for up to four businesses.

The centre is jointly funded by provincial and federal governments and the City of Prince Albert. The process, from conceptual design to construction, will take about three years.