'My hands are killing me’: Saskatoon man just one of a handful of people to play perfect Pac-Man game

SASAKTOON -- Having reached the pinnacle of his favourite arcade game, Greg Sakundiak has more than 3.3 million reasons to be happy.

“I can’t even imagine finally doing this, it’s been a lifelong goal for me,” Sakundiak said. “I’ve reached the top in other events in my life, some of them have felt better than this but this one is right up there.”

Sakundiak is one of only a handful of people in the world known to have reached the game's maximum score and he did it just as Pac-Man celebrated its 40th anniversary.

Sakundiak believes he is only the eighth player to accomplish the feat.

Growing up in Grande Prairie, Alta., Sakundiak said he first started playing the game in 1981, a year after it was released.

So after 13 years recently & countless quarter's when I was a kid at the Fun Factory, I finally join the best Pacman players in the World. I did it on the 40th anniversary of the making of the game. Just over 4 hours of straight play. Not sure if the exact time yet. pic.twitter.com/QD7Kql7Yk9

Sakundiak said he got an itch to play again 13 years ago and purchased everything he needed to build the arcade game in his garage.

While many vintage arcade games have score counters that can keep rising into the stratosphere, upon reaching 3,333,360 points, Pac Man famously comes crashing to a halt on what is referred to as a "kill screen."

“It took me 13-and-a-half years of playing to get to the kill screen and what that entails is playing every board ⁠— there’s 256 boards ⁠— eating every dot, eating every energizer, killing every ghost when it turns blue and playing all the way through on your first life without dying,” Sakundiak said. 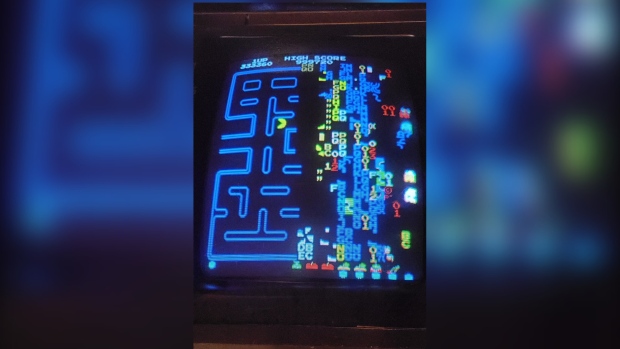 While he has spent over a decade chasing the game's kill screen, Sakundiak's record-book-worthy run through the game's gruelling ghost-filled mazes took just over four hours.

"I'm an electrician and my hands are killing me. I was exhausted standing there for over four hours."

In order to claim his world record score, Sakundiak filmed his four-hour, 23-minute and 28-second game and will be sending the footage to Twin Galaxies, the leading authority when it comes to classic video game records.

Even when Sakundiak reached the kill screen, he successfully found hidden dots on a scrambled half of the level. The only way to reach 3.3 million points is to find every hidden dot.

“Once you find the hidden dots, you have to kill your self obviously to get the dots again so you can get the maximum score.”

The game's frozen screen is a sight few people have ever seen in person, but now Sakundiak is one of them.

He has yet to turn off the machine in his garage, so he can enjoy the sight of it for just a little bit longer.