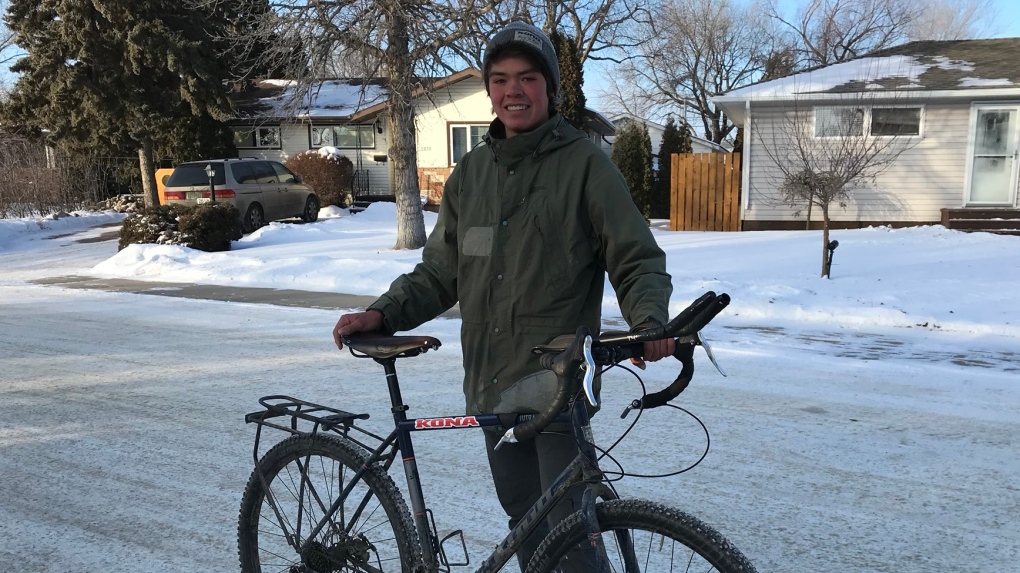 After seven months and 30,804 kilometers, 18-year-old B’yauling Toni is back home in Saskatoon.

Toni, an avid biker, cycled around the world to raise money for the Outdoor School Alumni Fund.

He completed his Grade 11 year in Outdoor School, saying the program heightened his love for the outdoors.

Toni stared his bike adventure in July riding from Saskatoon to Halifax, then jumping on a plane to Portugal where he cycled across Europe to China. From there he flew to Australia then back to Vancouver where he rode the last stint of his journey in harsh winter conditions across the Prairies until he arrived home.

He rode 10 hours a day, sleeping in a bivvy bag at night. In total, he spent $32 on accommodations, he said.

“If someone invites you in, then that’s a really nice night, but most of the time you’re just out and about,” Toni told CTV News.

He said his most memorable moment was when he spent a day in Mongolia living like the locals, with a shepherd boy teaching him how to ride a motorbike, herd sheep, and hunt foxes. He slept in a Yurt, a traditional round tent covered with skins or felt.

He did face some challenges and scary moments.

While riding his bike in New Zealand, a road raged driver rear-ended him and he fell into the middle of an intersection, ripping his clothes and losing most of his money for the rest of his trip.

“I had $26 to get from Wellington, New Zealand to Auckland. And I only spent $6, because I just bought bags of oatmeal. You could get large bags of oatmeal for like one or two dollars in New Zealand, so that’s what got me through the six days.”

When he landed back on Canadian soil in Vancouver, he met up with his sister who helped sort out his financial troubles.

The last stretch of his trip from Vancouver to Saskatoon was the toughest, Toni said.

“Got into some really cold weather. It was actually the winds that were the toughest. I ended up with a little bit of frostbite on the chin,” he said.

Toni made it back to his home on Tuesday, making him the youngest person to ride his bike around the world.

“I was never really big about the record, it wasn’t something that really motivated me, it was more my love for travelling and passion for Outdoor School.”