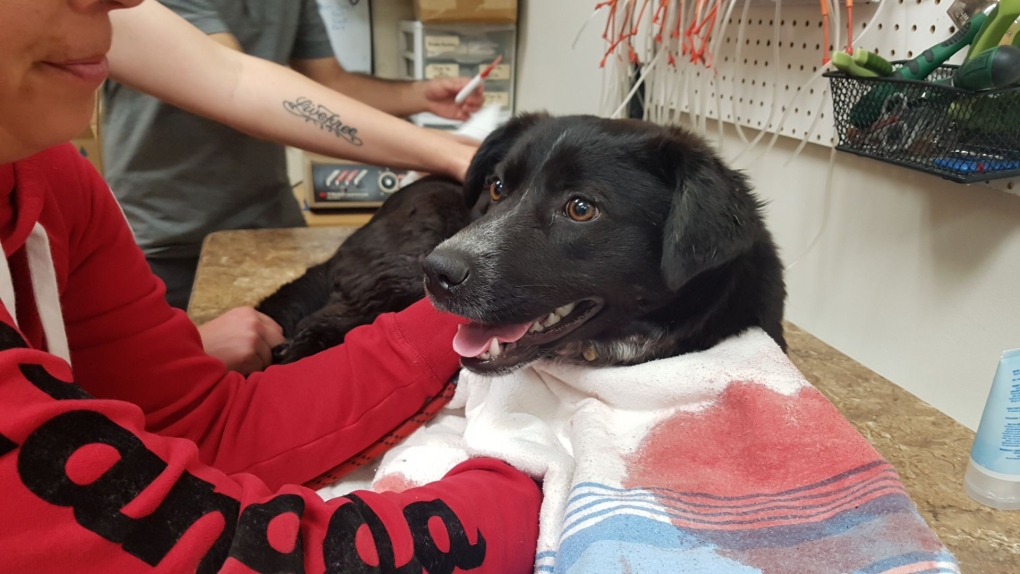 Lucas the dog is lucky to be alive after a fight with a beaver. (Photo courtesy Meagan Schmitz)

Lucas the dog is lucky to be alive after he was attacked by a beaver on the Red Pheasant First Nation.

A volunteer from The Canine Action Project was called to assist with the lab-collie mix last Wednesday.

The volunteer attempted to rescue the dog from its dog house where it retreated after the attack. It wasn’t until a slip leash was placed on Lucas that it was discovered he had severe injuries to his neck.

The beaver had bitten him on the neck, severing his jugular.

“The owner of the dog reached out to them saying her dog was attacked by a beaver and she couldn’t afford the vet care. She’s also in a wheelchair and couldn’t get Lucas to a clinic,” said Meagan Schmitz with the Canine Action Project, a volunteer organization that helps rural First Nations with the health and safety of dogs.

The wound was so bad that when the dog started flailing around blood was spurting out of his neck, she said.

They rushed the dog to the Battlefords Animal Hospital, putting pressure on his neck to prevent further blood loss. That saved his life, Schmitz said.

Lucas is expected to make a full recovery.

Schmitz said her group has never been called about a beaver attack, but she’s not surprised by fight because beavers are known for being aggressive.

“It’s similar to a dog getting quilled by a porcupine. Dogs are notoriously curious. They’re chasing it and they end up losing the battle.”

The Canine Rescue Project gets calls on average once a week about a dog that has been injured by wildlife such as porcupines, coyotes, or other dogs, or has been hit by a car.

Once Lucas recovers completely, he will be taken to one of the local adoption agencies so he can be given a new home.