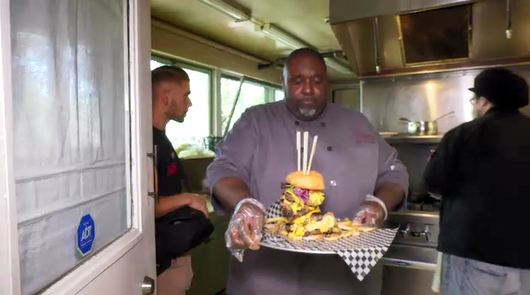 SASKATOON -- A Saskatoon restaurant received a visit from a couple of viral video stars Thursday afternoon as they took part in an eating challenge.

The challenge, which took place at Talayah's Southern Grill, was brought back for YouTubers Joel Hansen of Model vs. Food and Scott Watkins of Scott Eats.

"So we happened to be here in the area doing other kinds of challenges and events.” said Hansen. “Yesterday, we did a pizza challenge with a big charitable donation and we heard this place has some great food, really cool owner, so we had to come out and try some of this delicious southern cuisine."

Both competitors went up against the two-pound Diabolical Burger with 35 minutes to finish.

Hansen finished his burger at just over five minutes with Watkins finishing his at over six minutes and 30 seconds.

Chef Stackz, a cook at the Southern Grill from Louisville Kentucky, was happy to have the duo partake in the challenge and hopes to continue to serve the community genuine Southern cuisine.

"I like to do it,” said Stackz “Because I was raised and I know how to do it. And I want them to come to experience it. Like I have my sweet tea, I have my macaroni and cheese. Just to come and embrace what I grew up on. Real soul food, that's what I make here, soul food."

For those interested in trying out what Stackz has to offer, Talayah’s Southern Grill is located at 1222 Alberta Ave.