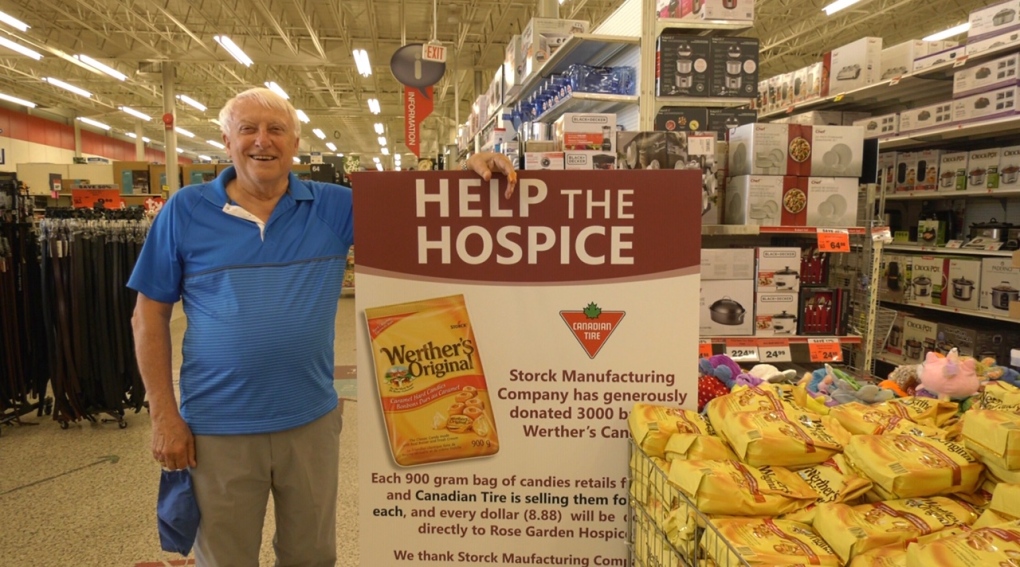 Canadian Tire owner Malcolm Jenkins has been donating to the Rose Garden Hospice since it kickstarted fundraising efforts. Canadian Tire is donating all of the proceeds from Werthers Original candy after Stork gave them 3,000 bags. (Jayda Taylor/CTV Prince Albert)

PRINCE ALBERT -- It started with Toffifee - and now a popular fundraiser in Prince Albert is expanding with a new treat.

The city’s Canadian Tire is known for selling the most Toffifee in the world in 2019 as part of a fundraiser for the Rose Garden Hospice.

Owner Malcolm Jenkins handed over a $26,000 cheque after selling 26,000 boxes of Toffifee. A dollar from every box contributed to building a home-like setting for people with terminal illnesses.

That fundraiser will continue later in the year, but in the meantime, Canadian Tire is donating all of the proceeds from Werthers Original candy.

Jenkins said Stork, the German company that makes Toffifee, reached out to him after the store sold so much candy for a good cause.

“They said ‘What can we do to help you?’ so I said ‘It would be really nice if you would write a nice cheque to the hospice with lots of zeros on it. That would be a really cool way of saying thank you,’” said Jenkins with a laugh.

“They thought about it, and they came back and they said ‘How about we give you 3,000 big bags of Werthers candy?’”

After about three weeks, Jenkins said they’ve already sold around a thousand bags.

“People have jumped right on it. We put a big pile down at the front of the store with a sign on it saying every penny goes to the hospice and everyone supports the hospice – who wouldn’t?” said Jenkins.

Jenkins said Canadian Tire has ordered 30,000 boxes of Toffifee for the Christmas fundraiser, which will feature a new dark chocolate flavour.

The board of the Rose Garden Hospice plans to raise about $4 million, and is over half way to its goal.

They’re holding a ground-breaking ceremony at the site on Friday morning.