SASKATOON -- The family of a La Ronge substitute teacher is searching for answers after the woman’s body was found along the side of a northern Saskatchewan road.

Four people have been charged with first-degree murder, kidnapping and forcible confinement.

The 28-year-old victim’s sister-in-law, Janika Slinn, said she doesn’t recognize any of the suspects.

“It’s devastating that it happened right before Christmas.”

Billette, who was a substitute elementary teacher in La Ronge, leaves behind four children, with the oldest celebrating her 11th birthday this month, according to Slinn.

“Sheena was caring, kind always put other people before herself.”

A GoFundMe page, with a $50,000 goal, has been set up to help Billette’s widow raise the kids.

Suspect still on the loose: RCMP

Police have charged five people in connection to Billette’s death.

One of the suspects, Charlie Charles, is still at large, according to RCMP. Charles is missing two fingers on his left hand, which may still be bandaged up.

The most recent charge was laid Saturday.

In Christopher Lake, police arrested 27-year-old Kandi Ratt with accessory after the fact to murder.

Slinn is urging anyone with information to contact police, to help the family get closure. 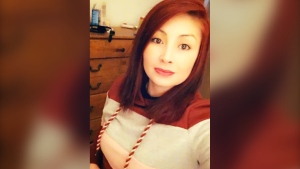