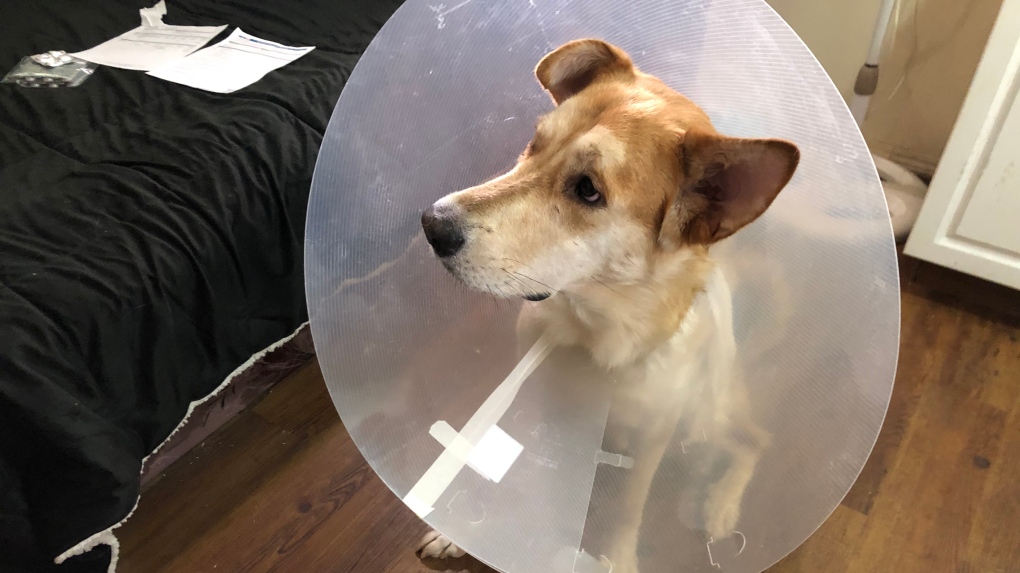 Jammers is recovering from injuries sustained in a dog attack.

A Christmas Eve trip to a Saskatoon 7-11 has turned into a financial nightmare for a pet owner now facing a huge vet bill she says she can't afford.

"We rounded the corner of the building and there was a dog sitting right at the entrance and it looked at us and charged at me and my boyfriend," said Lily Isaac, 22, in an interview at her home.

"But my dog jumped in front of us and the dog latched on to this throat and didn't let go for many minutes."

Isaac said she often takes her year-and-a-half-old king shepherd-akita cross named Jammers to the 7-11 in the 3000 block of 33rd Street West, always on a leash.

"The dog's owners were inside, and he had no leash, and when the owners did come out, they couldn't get their dog off of my dog and when the dog finally did release Jammers he was all covered in blood and the dog's face had blood everywhere," Isaac said.

"What if it attacked a kid because it was loose, it came after my boyfriend and I not my dog, my dog just got in the way."

Isaac took Jammers to a veterinarian on Boxing Day. That's when she learned how deep the wounds were on Jammers, and how much it would cost to start to take care of her dog.

"The vet said they are pretty sure he has a punctured lung and arteries and it might also take surgery and without any surgery or medication … what's required for the vet to look at him is about $1,200," Isaac said, adding the veterinarian told her if she can't afford the cost, she may need to start thinking about surrendering Jammers to a pet shelter. 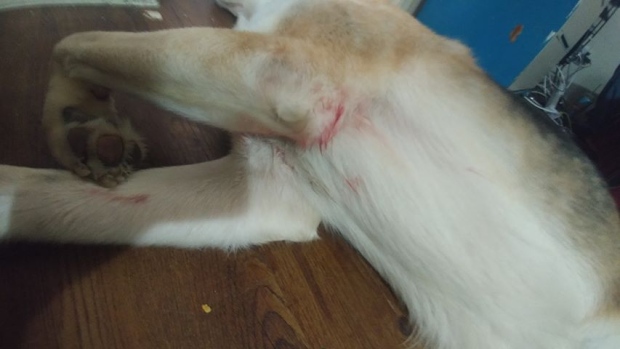 "I would never see him again or ever know how he's doing. And he's my baby and it would suck to lose him," she said.

Isaac has set up a GoFundMe page to try and collect donations for her dog's vet bills, and she's trying to work with her veterinarian to see if they office would accept donations to help cover the vet costs for Jammers.

"I would never consider giving him up but at the same time it sucks thinking that he could be hurt and I can't pay for it and he could die," she said.

Isaac said she phoned the Saskatoon Animal Control Agency but was told nothing could be done unless she knew where the dog and the dog's owner's lived.

"I definitely don't blame the dog that came at Jammers … it wasn't the dog's fault, it's the owners that should have been more responsible and tied the dog up."