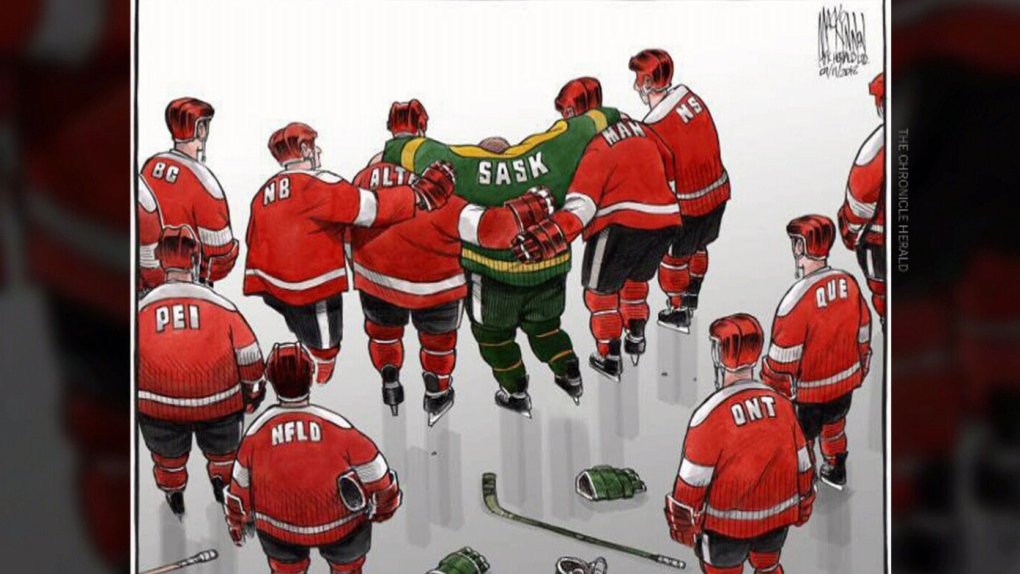 Bruce MacKinnon of the Halifax Chronicle Herald said he was notified his cartoon was on a shirt selling for $42.63 on Redbubble.com, and said the seller was trying to profit from a tragedy.

"They are making money directly from not only stolen artwork, but people's sorrows," MacKinnon said in an interview with The Canadian Press on Wednesday.

The cartoon shows hockey players representing other provinces supporting a hockey player from Saskatchewan after 16 players and staff with the Humboldt Broncos junior hockey team were killed when their bus collided with a transport truck.

MacKinnon said the cartoon was inspired by the immediate outpouring of support of Canadians from coast to coast.

"Things that dark don't lend themselves to cartooning," MacKinnon said. "You're looking for some sort of silver lining in all of this: It was the reaction from Canadians and the response was overwhelmingly generous."

Late Tuesday, Redbubble said in a tweet it would not keep any profits from Humboldt-related work.

"In line with Redbubble policy, we will be donating all company profits from work related to the tragic Humboldt Broncos accident to charity," it said.

The web site is still selling multiple Humboldt t-shirts with common phrases like Pray for Humboldt or Humboldt Strong that would not be subject to copyright.

MacKinnon said people who buy Humboldt Broncos merchandise just want to show their support. But he said it's a "buyer beware market."

"People should be careful where they purchase their goods and understand where it comes from."