'We just need a place to go': City blocks off outdoor area in Prince Albert used for by some for sleeping, shade 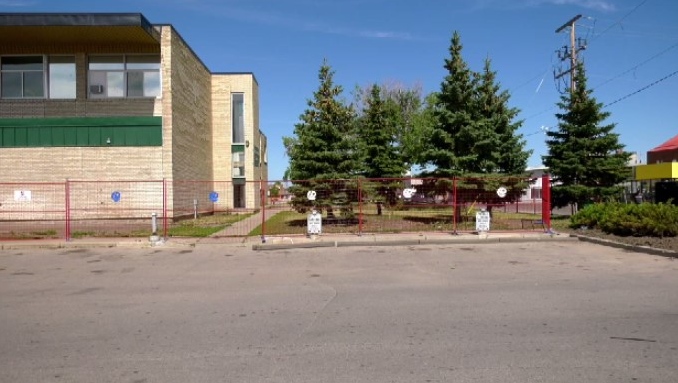 PRINCE ALBERT -- A two-metre-high fence was erected around the Margo Fournier Centre in Prince Albert Aug. 12, restricting all front access into the facility’s lawn to the public.

Prince Albert City Manager, Jim Toye said he made the decision to restrict access to the city-owned property because of health and safety concerns. The fence stops people from gathering and sleeping on the property.

“There were needles here, people would defecate in the doorway here. It was getting very, very difficult,” said Toye.

He said they city has an obligation to provide a safe environment for city employees, the public and groups that rent and use the centre such as Eagle’s Nest Youth Ranch and the Heritage Senior Centre.

Toye said there were reports from the police of people sleeping outside the centre. He was also alert to concerns about the spread of COVID-19 due to the groups of people that were gathering. Sometimes around 40 people would be around the centre at the same time.

Tammy Ballantyne says she used to frequent the green space outside the Margo Fournier Centre. She says she’d meet her friends there and it provided her with a place to sit in the shade on hot days. However since the fence went up she’s hasn’t been back.

"We go down to the riverbank since this place closed we just need a place to go,” said Ballantyne.

"Most of us sleep outside and we really need help out here, you know, for the homeless.” Ballantyne said. She says it’s difficult to get a place to sleep in the shelters in the city.

Toye said they are working with other agency to help the homeless. Public portable washrooms and sinks have been added near Central Avenue. The city also represented on a committee to that’s working to secure a new building for a shelter in the city. They hope the plans will be finalized this summer and to have the shelter open before winter 2020.