'We had to do something': Prince Albert Legion marches on with Remembrance Day ceremonies 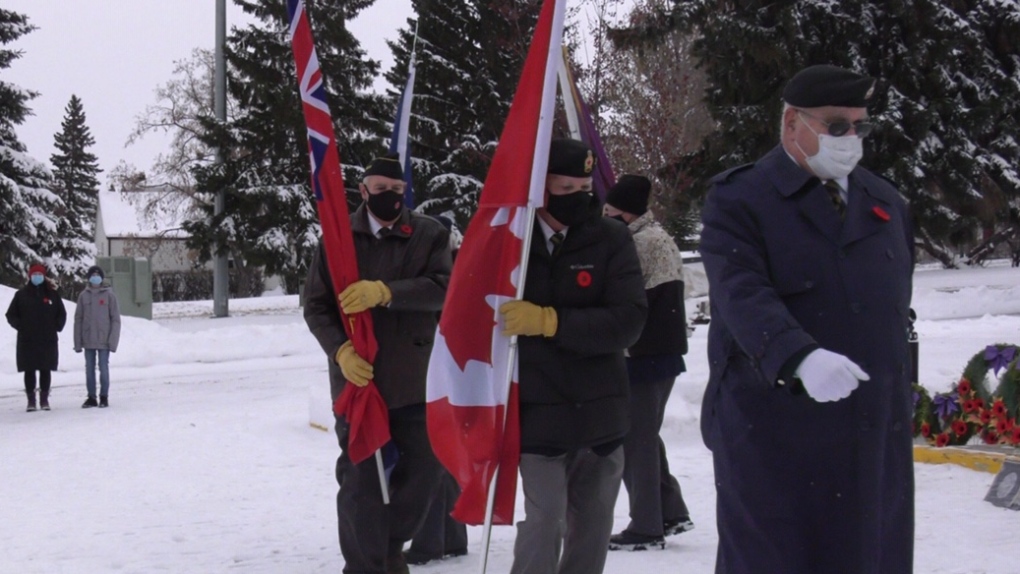 Colour parties marching off at the Legion’s private ceremony at the cenotaph at Court of Queen’s Bench in Prince Albert. Jayda Taylor/CTV Prince Albert

PRINCE ALBERT -- Remembrance Day looked different for Prince Albert residents this year, but the small, private ceremonies were just as meaningful for those who attended.

Master of ceremonies Grant Ursaki once again led the event. For the past couple of years, he’s been leading the service at the armoury, where thousands of people are typically in attendance.

“We had to have a very subdued ceremony,” he said. “But we felt we had to do something.”

Despite the restrictions due to the pandemic, Ursaki said it meant a lot to pay tribute to those who fought for freedom.

“Even though I didn’t end up in combat myself, I lost a lot of friends over the years in the service, people I worked with, people who worked for me. It’s not easy,” he said.

Ursaki was in the Royal Canadian Air Force for 40 years.

He said he’s never seen a Remembrance Day where a large amount of people in the community couldn’t get together to pay their respects.

Marcel Dagenais is a dominion vice-president with the ANAVETS, and is responsible for all of the units in Saskatchewan. He was a flag-bearer this year.

“Being able to utilize the cenotaph at the courthouse for our service today was touching to me. I really appreciated it,” Dagenais said. “I would not hesitate again to it again in the future.”

The ceremony at the courthouse cenotaph included marching of the colour parties, the Last Post, the Act of Remembrance and laying of the wreaths.

Members of the Prince Albert Police Service and fire department did salutes outside of their main stations.

“The Prince Albert Police Service salutes those who have served, and those who continue to serve, so that we may all be free. We remember your sacrifice and thank you for your service,” the police service wrote on its Facebook page.