'We could make it work': Protestors push back after Sask. horse racing is season is axed due to COVID-19 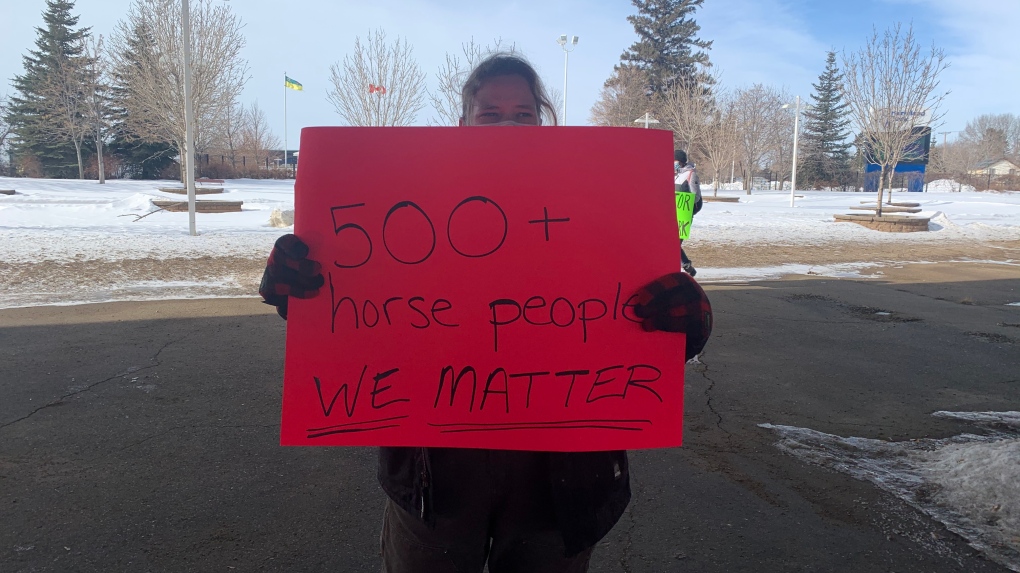 SASKATOON -- Nicole Hein says Prairieland Park’s decision to cancel the 2021 horse racing season would be a major blow to the local industry.

“I think that people really need to address this because there are lots of people being affected by it. And silence frankly isn’t the solution,” Hein said during a demonstration outside Prairieland Park on Monday. She competed as a jockey during the track's 2019 season.

Several people held signs criticizing the move by Prairieland Park, which announced the cancellation of the upcoming season in a news release.

It is the second consecutive cancellation of the entire thoroughbred horse racing season at the track due to the pandemic.

“Given the ongoing restrictions surrounding COVID-19, including logistical issues related to the ability to get jockeys into Canada given travel restrictions, quarantine requirements, visa approvals, and extremely limited airline scheduling to the Caribbean, meant that Prairieland could not commit to a race meet this year.”

Prairieland Park said 76 per cent of professional jockeys come from the Caribbean.

But Hein says that while jockeys often come from other provinces or countries, plenty of local talent exists as well.

“I think we have quite a few local people, plus others from out of province who can come as needed.”

“We could make it work. Everybody else has right?”

Eddie Esquirol, president of the Horseman’s Benevolent and Protective Association (HPBA), recently told CTV News he wants to meet with the province to see if they could help.

“We want to identify what our concerns are and how it impacts our industry. Do we want employment and opportunity to go to our neighbouring provinces? We want to keep the jobs in Saskatchewan.”