SASKATOON -- Skiers and snowboarders at Table Mountain may have witnessed a boy dangling from the chairlift this weekend.

Liam Gratton, 12, said a quick move that involved adjusting the lift bar resulted in him almost falling as it glided over the trails below.

“We were going up and I was shifting over and I slipped off,” Liam said.

Reacting quickly, Liam said he grabbed on to whatever he could and luckily managed to wrap his arm and elbow around the edge of the chairlift and the safety bar, which saved him from falling.

Video from the chairlift behind the Gratton’s surfaced on social media, showing the few minutes Liam dangled before making it to the top of the chairlift. In the video people can be heard encouraging Liam to hang on little longer. 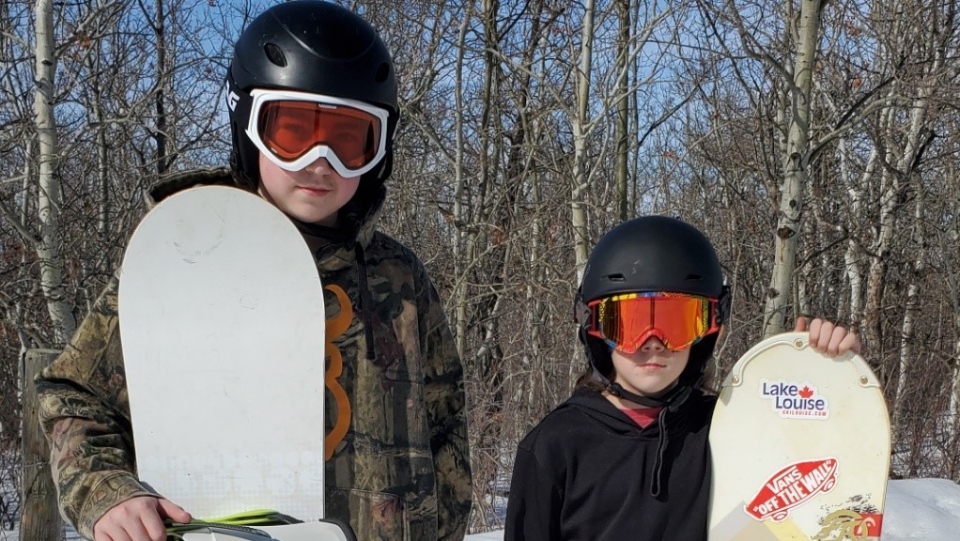 Luc and Liam Gratton hit the slopes at Table Mountain on March 6. (Photo by Kaelah Gratton)

Liam’s mother Kaelah Gratton said her sons told her what happened when they got home, but she didn’t quite understand  until she saw the video.

"Thank God, because it could have been a very serious incident," Blouin said.

“Our ski patrol is probably going to be more vigilant and try to encourage people to use (the safety restraint). Once they get on the chairlift and they’re away from the loading station there’s not too much we can do if they want to lower it or not," he said.

"We try to encourage people, the signs are there. They are supposed to lower the safety bar, but I guess if you talk to the police lots of people are driving around without seatbelts.”

Aaron Arcand was out with a friend at Table Mountian when he noticed Liam slip off of the seat and begin holding on.

“We were just talking while we were waiting to get up there, and then right in front of us all of a sudden we just saw the little boy there kind of looking on the side, and I think he got too close to the side and slipped,” Arcand told CTV.

“We couldn’t do anything, we just had to sit there. I started telling that boy to ‘just hang on, don’t let go, just keep on hanging man, just don’t let go’ it was intense, a shocked feeling.”

Arcand then pulled out his phone and recorded the footage of Liam holding on until the lift reached the top of the slope safely.

He said it was frustrating to be so close to Liam but not be able to help, and once he got to the top, Arcand said he went to check on Liam and compliment him on his upper body strength.

Arcand said he isn’t going to let this incident impact his view of Table Mountain. He said he views it as an accident, and he will continue to utilize the hills until the end of the season.