SASKATOON -- An Indigenous clothing and art store has opened in the lakeside town of Waskesiu.

The store was started by the great-granddaughter of Métis trapper Louis LaVallee.

Linda Lavallee returned to area once lived in by her ancestors and is part of land claim filed against the federal government.

She said Louis LaVallee and his sons were displaced from their cabin on the shore of LaVallee Lake in order to make way for the formation on Prince Albert National Park.

A sign reading “1927” hangs above the doorway of the Creenisgaa store. 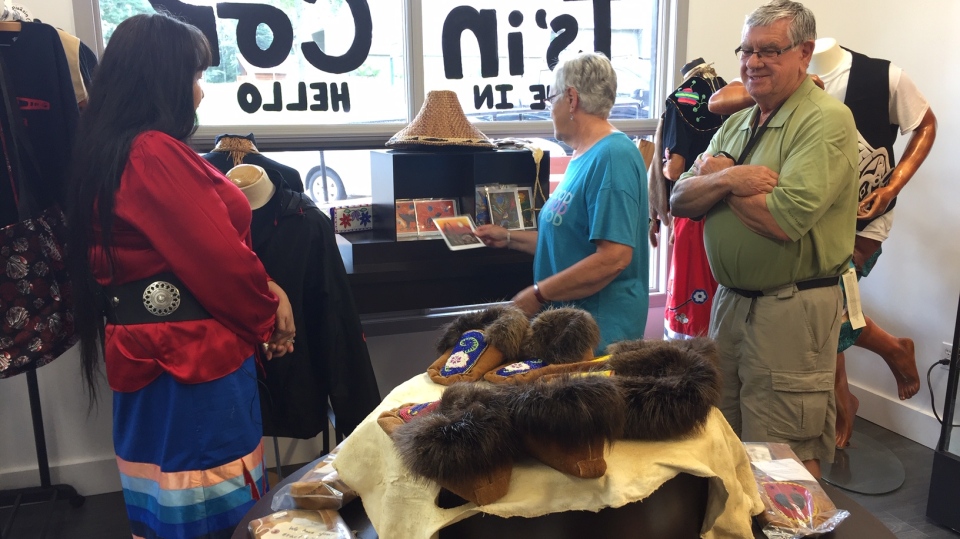 “That was the year he got kicked out. It’s the year we lost everything,” said LaVallee. She said the store puts her family back on their ancestral territory. Louis Lavallee’s cabin was in what is now the park’s north west corner, she said.

The store sells Creenisgaa leather boots designed by LaVallee. They have been featured on the runway in New York’s Fashion Week and have been sold to customers around the world. The boots are known for their lace-up design and Indigenous-themed prints.

This is Creenisgaa’s first brick and mortar store.

LaVallee lives in British Columbia but said Waskesui is the right place to set up shop.

“I had told my husband when we started that we are doing this for the First Nations around here, not for the tourists. It’s just to bring our culture back home.”

LaVallee’s husband and son also have art work and clothing for sale in Creenisgaa. Around 17 Indigenous people from British Columbia to Manitoba have art, tea and other goods for sale in the store. LaVallee said she’s looking to add more products.

“We are still needing more artwork and beadwork from local people. And we are willing to trade materials for goods with artisans,” said LaVallee.

All five of the store’s employees are LaVallee family members from Timber Bay and area.

Ribbon skirts, art, tea and jewelry are some of the items carried in store. The store also carries supplies for local designers like cloth and beads.

LaVallee wants to promote the speaking of Cree and write Cree words outside the store. She also donated to the Cree language education programs in her home community and paid each student a dollar for every Cree word they learned.

LaVallee’s 84-year-old uncle Jacob LaVallee is part of the land claim and said he would like to see the matter settled before he dies.

He has had a heart attack and said his health is failing.

He remembers that his dad did some farming, gardening and trapping and lived off the land before their family’s displacement.