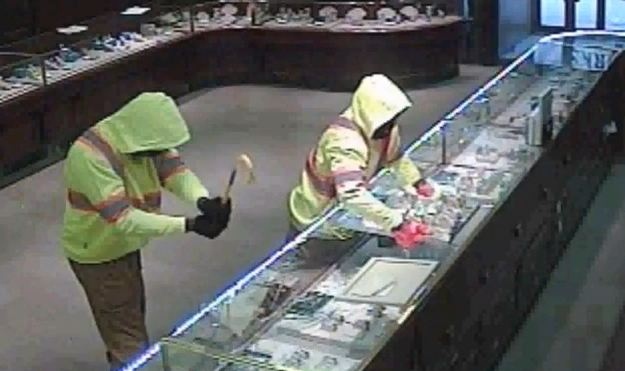 A Canada-wide warrant has been issued for the fourth suspect in the robbery of a Saskatoon jewelry store nearly two years ago.

Jean Gillis Kesner, from Montreal, is wanted on charges of robbery, wearing a disguise while committing an offence and conspiracy to commit arson, Saskatoon police said in a media release Wednesday.

Police allege the 23-year-old was the fourth man involved in a Feb. 1, 2014 heist at Birks jewelry store on Third Avenue South.

According to police, four men entered the store brandishing crowbars and wearing construction-style jackets and black balaclavas. They smashed display cases and stole a large quantity of jewelry, including Rolex watches.

A Dodge Caravan — used as the getaway vehicle in the robbery, according to police — was found burning near the University of Saskatchewan campus about 90 minutes after the suspects broke into the store.

A Canada-wide warrant was issued for one suspect, Muhidiin Ahmed-Farah, about a week after the robbery while warrants for two other men, Rida Niam and Pierre Louis Hernandes, were issued in May 2014.

Ahmed-Farah was arrested in April 2014 in Montreal on charges of armed robbery, conspiracy to commit arson, and wearing a disguise during the robbery. He was returned to Saskatoon where he was sentenced to four years in prison after pleading guilty to taking part in the robbery.

Niam was arrested by Montreal police and transported to Saskatoon in May 2015. Hernandes is still wanted.

Investigators believe Kesner may be in Montreal.

Surveillance footage of the heist was released shortly after the robbery.