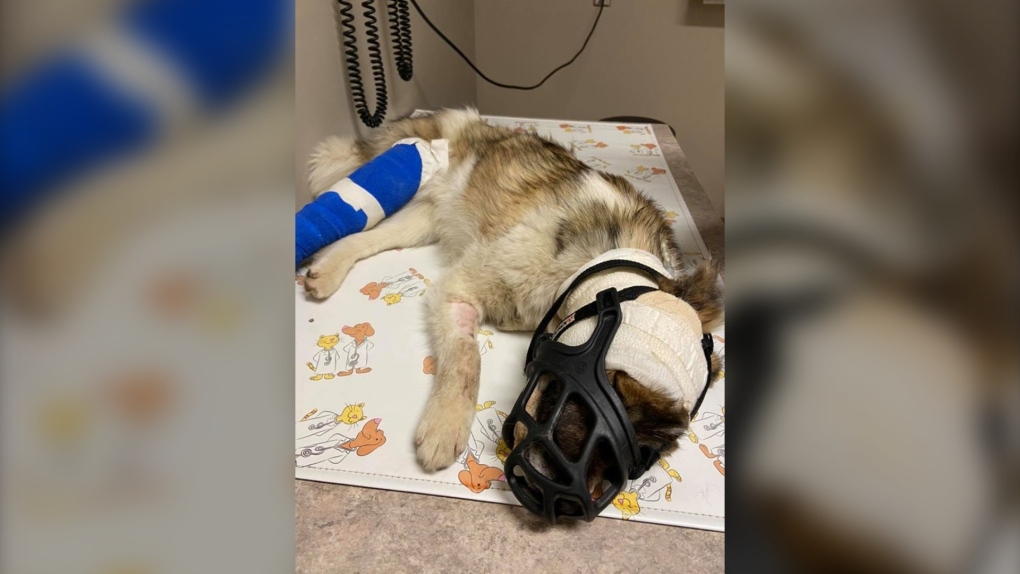 Chomp, roughly one year old, came into their care earlier in June with what WANAR called a severely broken leg and jaw. (Submitted photo)

SASKATOON -- We All Need A Rescue (WANAR) has been looking after a dog that was injured after being struck by a car in northern Saskatchewan.

Chomp, roughly one year old, came into their care earlier in June with what WANAR called a severely broken leg and jaw, in addition to a host of smaller injuries.

"The future is to make sure all the surgeries are going to hold and that he’s going to be able to have full motion of his jaw once it’s healed," WANAR owner Brent Arstall said.

"Because of how severe the jaw was broken in several different places, there’s a lot of healing. He’s going to have to be wearing the gear he wears right now probably for the next six weeks, minimum."

According to Arstall, Chomp has been showing improvements in his mood, even acknowledging those working to help save him.

"He seems to be quite happy, you can tell in his eyes when he sees us, and his tail is wagging and he gets excited when he knows were around," Arstall said.

For now Arstall said they are monitoring Chomp’s condition and feeding him through a tube.

Arstall said they are now counting on the public’s support as a lot of their yearly income has not come due to COVID-19 cancellations.

"Our big fundraisers that we would have normally already had have all been postponed or cancelled. We’re just not 100 per cent sure where were going to be at in six months to a year without fundraising."

Those looking to donate can visit http://www.k9countrylodge.ca/.