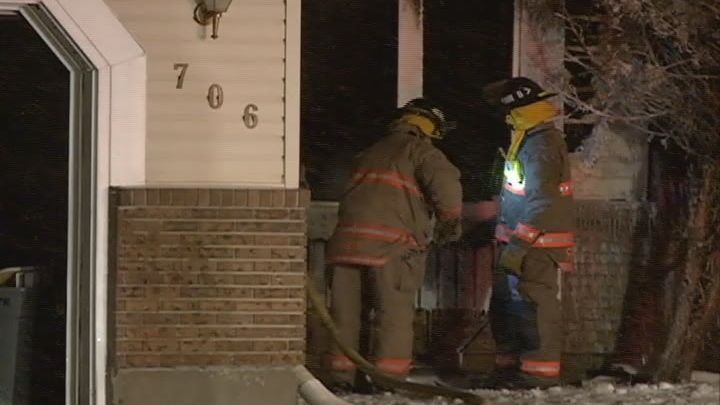 Two houses in the Lakeridge neighbourhood were destroyed in an early morning fire Thursday.

Fire crews from three stations were called at 2:30 a.m. and arrived at the house at 706 Brightsand Cres. to discover 20- to 30-foot flames showing from the house. The fire had also spread to a neighbouring house.

That led to fire officials issuing a second alarm that saw crews from two more stations join the effort. At its peak, eight pieces of apparatus and 32 firefighters were on scene.

Firefighters were unable to enter the house at 706 Brightsand because of the intensity of the fire, and set up a defensive attack to protect the exposures, Saskatoon Fire and Protective Services said in a news release.

Crews did enter the neighbouring home where they completed a primary search but had to withdraw when the roof started to collapse.

Crews brought the fire under control in just over an hour but remained on the scene for several hours extinguishing spot fires.

Fire officials said in a news release early Thursday that all occupants had been accounted for and no injuries were reported as a result of the fire.

A fire investigator was on scene Thursday morning, but the cause has yet to be been determined. A damage estimate was not immediately available.